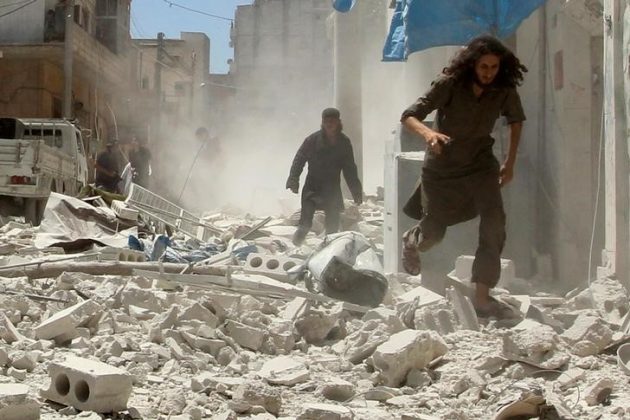 Men make their way through the rubble of damaged buildings at a site hit by air strikes in Idlib city, Syria July 20, 2016. REUTERS/Ammar Abdullah

BEIRUT (Reuters) – The head of the opposition Syrian National Coalition called for a suspension of the U.S.-led air campaign against Islamic State in Syria while reports of dozens of civilian deaths from air strikes around the northern city of Manbij are investigated.

SNC president Anas al-Abdah said the strikes should be halted while the incidents were investigated, according to a statement issued late on Wednesday, and warned that the killing of civilians by the U.S.-led air campaign would “prove to be a recruitment tool for terrorist organizations”.

“It is essential that such investigation not only result in revised rules of procedure for future operations, but also inform accountability for those responsible for such major violations,” Abdah wrote in a letter to foreign ministers of countries in the anti-Islamic State alliance.

U.S. Defense Secretary Ash Carter said on Wednesday the U.S.-led force would look into the reports of civilian casualties around Manbij.

The Observatory said the dead from Tuesday’s strike included 11 children. Pictures on social media purporting to be from the scene showed dust-covered corpses of two young children next to rubble.

Syria’s foreign ministry said Tuesday’s air strike, which hit the village of Toukhar north of Manbij, was carried out by French forces, while Monday’s strike was by U.S. jets.

“(Syria) condemns, with the strongest terms, the two bloody massacres perpetrated by the French and U.S. warplanes and those affiliated to the so-called international coalition which send their missiles and bombs to the civilians instead of directing them to the terrorist gangs,” it said in a letter sent to the United Nations this week, according to state news agency SANA.

A spokesman for the U.S.-led alliance said there were “multiple national aircraft providing strikes in Manbij. So how the Syrian government knows who conducted what strike, I question.”

The Western-backed Free Syrian Army, an umbrella grouping of factions which has fought against both President Bashar al-Assad and against Islamic State militants, also condemned what it called the “shocking massacres” near Manbij.

“We will not allow any crime to be justified under the pretext of combating terrorism,” it said in a statement signed by more than 30 armed factions.

(This story corrects spelling of village in paragraph 7)