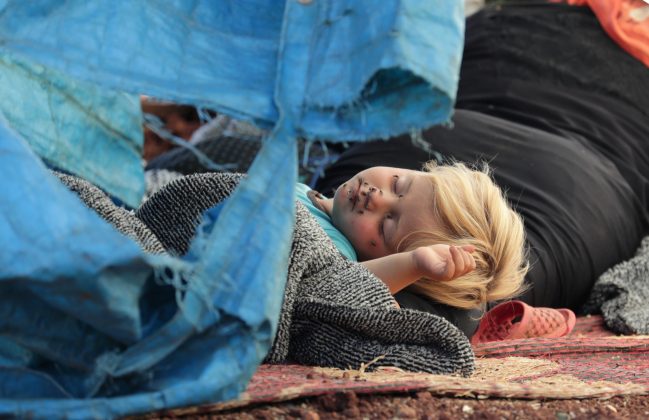 A displaced Syrian child sleeps on a mat laid out on the floor in an olive grove in the town of Atmeh, Idlib province, Syria May 19, 2019. Picture taken May 19, 2019. REUTERS/Khalil Ashawi TPX IMAGES OF THE DAY

ATMEH, Syria (Reuters) – Camped on the Turkish border to escape bombardment by Russian and Syrian government forces, many displaced Syrians are angry and frustrated that Turkey has not done more to protect them from the bombs or let them cross the frontier to safety.

The border wall a few hundred meters (yards) away offers a degree of cover for thousands of people, since air strikes are rare so close to Turkey. But it also blocks any chance they have of fleeing the conflict and joining millions of refugees abroad.

“Turkey is our only option today,” said Abu Abdallah, 51, who left his village at the start of the war in 2011 to seek sanctuary near the town of Qalaat al-Madiq, until it was captured by Syrian government forces in early May.

“We can no longer put up with living under bombardment or in the open under the trees,” said Abu Abdullah, one of thousands of Syrians living in white tents dotted around the rock-strewn olive groves, some of them only 50 meters (yards) from the border.

Some 180,000 people were displaced by the recent attacks in northwest Syria, the last major rebel stronghold. The increase in shelling killed dozens of people and marked the most intense period of violence for months between President Bashar al-Assad and the rebels, who launched a counter-attack last week.

The Syrian government says it is responding to attacks by al Qaeda-linked militants. The dominant insurgent faction in the region is the jihadist Hayat Tahrir al-Sham (HTS), although the army offensive has not focused on the central Idlib area where it is most concentrated, an HTS-aligned opposition figure said.

Much of the bombardment has hit a buffer zone around Idlib province and surrounding territories which was set up by Russia and Turkey in September under a deal which put off a full-blown assault against the region and its 3 million residents.

Shells from Syrian government territory also hit a Turkish military observation post, one of 12 set up near the Idlib borders by Ankara, which backs the rebels.

At the border, many of the displaced were angry at the lack of Turkish action in response to the recent offensive, and called on Turkey to open its border to allow people to escape.

“We didn’t ask to go into Turkey before,” said 32-year-old Khsara Ahmed al-Hussein. “But when you set up a de-escalation zone and … you guarantee that I won’t get struck, but then even the Turkish observation point is struck by the regime, then what’s the point of protection if you can’t even protect yourself?” 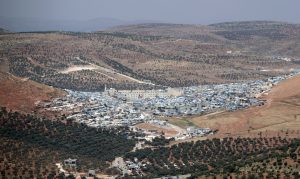 FILE PHOTO: A general view of Atmeh camp for the displaced, in Atmeh town, Idlib province, Syria May 19, 2019. REUTERS/Khalil Ashawi

When bombardment of Hussein’s village intensified, his family dug holes in the earth outside their house and slept in them. When the situation became unbearable, they headed to the border, where he has been living under trees for two weeks.

“There were eight planes in the air, bombing intensively, as if it were World War Three,” he said.

Air strikes have hit 18 health facilities and dozens of schools, according to the U.N. Office for the Coordination of Humanitarian Affairs (OCHA). At least 38 children have been killed since the start of last month, Save the Children said.

Near the border village of Atmeh, dozens of people sat under trees with a few blankets and pillows arranged on the hard earth. A blue plastic tarp was draped over the trees to protect them from the burning sun.

Um Bassan wants to join her children who have been in Turkey for over a year, after she and their father spent everything they had to smuggle them out of Syria.