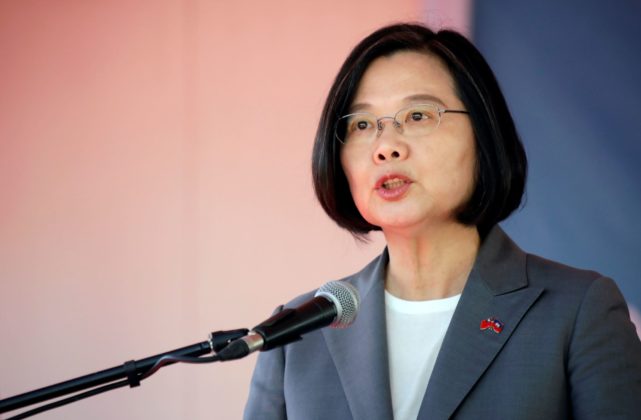 TAIPEI (Reuters) – Taiwan accused China on Monday of trying to influence its presidential and legislative elections after the Solomon Islands cut off ties with Taipei.

The Solomon Islands was the sixth country to switch allegiance to China since President Tsai Ing-wen took office in Taiwan in 2016. Its decision on Monday dealt her a new blow in her struggle to secure re-election in January amid criticism of her handling of Beijing and rising tension with China.

Self-ruled Taiwan now has formal relations with only 16 countries, many of them small, less developed nations in Central America and the Pacific, including Belize and Nauru.

China claims Taiwan as its territory and says it has no right to formal ties with any nation.

Speaking to reporters in Taipei, Tsai said Taiwan would not bow to Chinese pressure, describing the Solomon Islands’ decision as new evidence that Beijing is trying to meddle in the January elections.

“Over the past few years, China has continually used financial and political pressure to suppress Taiwan’s international space,” Tsai said, calling the Chinese move “a brazen challenge and detriment to the international order.”

“I want to emphasize that Taiwan will not engage in dollar diplomacy with China in order to satisfy unreasonable demands,” she said.

China’s foreign ministry did not immediately respond to a request for comment.

Taiwan’s foreign minister, Joseph Wu, said Taipei would immediately close its embassy in the Solomon Islands and recall all its diplomats.

“The Chinese government attacked Taiwan purposely before our presidential and legislative elections, obviously aiming to meddle with the voting. The government strongly condemns this and urges people to hold on to its sovereignty and the value of freedom and democracy,” said Wu, whose resignation was rejected by Tsai.

“Taiwan has never bowed to pressure from one single setback, and it won’t be defeated by this blow,” Wu said, urging support from allies in the region to defend Taiwan’s freedom and democracy.

China has been trying to secure allies from Taiwan, and Burkina Faso, the Dominican Republic, Sao Tome and Principe, Panama and El Salvador had already cut off ties with Taipei.

Beijing has stepped up pressure to squeeze the island, which have included regular Chinese bomber patrols around Taiwan, since Tsai took office. China suspects Tsai of pushing for Taiwan’s formal independence, a red line for Beijing.

Tsai said the Chinese move could be an “attempt to divert attention” from months of protests in Chinese-ruled Hong Kong, and that China was forcing Taiwan to accept a formula similar to Hong Kong’s “one country, two systems” arrangement, which guarantees certain freedoms.

“I am confident that the 23 million people of Taiwan have this to say in response: not a chance.”

A senior official familiar with Taiwan’s security planning told Reuters Beijing had issued an “urgent order” to secure the Solomon Islands’ allegiance “at any cost” on Sunday night, and called it a move to distract domestic attention from the Hong Kong issue before the 70th anniversary of the founding of Communist China on Oct. 1.

The protests in Hong Kong pose the biggest challenge for Communist Party rulers in Beijing since President Xi Jinping took power in 2012.

The source said the rupture in ties had prompted expressions of concern from countries including the United States, Australia and New Zealand, who had been involved in efforts to help Taiwan secure ties with the Solomon Islands.

The Solomon Islands’ decision followed a months-long review of the pros and cons of a switch to Beijing, which was offering $8.5 million in development funds to replace support from Taiwan.

In a cabinet vote on Monday, there were 27 votes to shift ties and six abstentions, creating an “overwhelming” majority, a Solomon Islands member of parliament told Reuters. The prime minister’s office did not immediately respond to questions.

(Reporting By Yimou Lee; additional reporting by Ben Blencher in BEIJING and Jonathan Barrett in SYDNEY; Editing by Timothy Heritage)