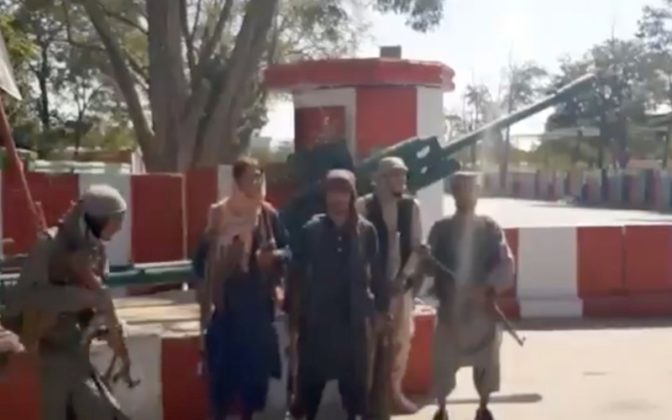 Taliban fighters gather on main road intersection in city of Ghazni, Afghanistan in this screen grab taken from a video released by the Taliban on August 12, 2021. Taliban Handout/via REUTERS

KABUL (Reuters) -Taliban fighters captured the strategic Afghan city of Ghazni on Thursday, taking them to within 150 km (95 miles) of Kabul following days of fierce clashes as the Islamist group ruled out sharing power with the government.

The speed and violence of the Taliban advance, including heavy fighting in their heartland and the second-biggest city of Kandahar, have sparked recriminations among many Afghans over U.S. President Joe Biden’s decision to withdraw U.S. troops and leave the Afghan government to fight alone.

The gateways to the capital have been choked with people fleeing violence elsewhere in the country this week, a Western security source said. It was hard to tell whether Taliban fighters were also getting through, the source added.

With the last of the U.S.-led international forces set to leave by the end of the month and end the United States’ longest war, the Taliban now control about two-thirds of the country. On Wednesday, a U.S. defense official cited U.S. intelligence as saying the Taliban could isolate Kabul in 30 days and possibly take it over within 90.

Al Jazeera reported a government source saying it had offered the Taliban a share in power, as long as the violence comes to a halt.

Afghan government spokespeople were not immediately available for comment and it was not clear to what extent the reported offer differed from terms already discussed at stalled talks in Qatar.

Taliban spokesperson Zabihullah Mujahid said he was unaware of any such offer but ruled out sharing power.

“We won’t accept any offer like this because we don’t want to be partner with the Kabul administration. We neither stay nor work for a single day with it,” he said.

Under a deal struck between the United States and the Taliban last year, the insurgents agreed not to attack U.S.-led foreign forces as they withdraw, in exchange for a promise not to let Afghanistan be used for international terrorism.

The Taliban also made a commitment to discuss peace. But intermittent talks with representatives of the U.S.-backed government have made no progress, with the insurgents apparently intent on a military victory.

Ghazni, southwest of Kabul on the ancient route between the capital and Kandahar, was the ninth provincial capital the Taliban have seized in a week.

“All local government officials, including the provincial governor, have been evacuated towards Kabul,” said the official, who declined to be identified.

Kandahar and other southern and eastern provinces bordering Pakistan have long been Taliban heartlands but they have made their biggest gains in recent weeks in the north. Even when the group ruled the country from 1996-2001, it never controlled all of the north.

There were heavy clashes in Kandahar. A Taliban commander told Reuters most parts of the city were in their control but fighting was still going on. In western Herat, a Taliban spokesman said their fighters had captured police headquarters.

The Taliban said they had seized airports outside the cities of Kunduz and Sheberghan in the north and Farah in the west, making it even more difficult to supply government forces.

They said they had also captured the provincial headquarters in Lashkar Gah, the capital of the southern province of Helmand, a hotbed of militant activity.

Government officials there were not immediately available for comment. Fighting had also flared in the northwestern province of Badghis, its governor said.

President Ashraf Ghani flew to northern Mazar-i-Sharif on Wednesday to rally old warlords he had previously tried to sideline, now needing their support as the enemy closes in.

The Taliban risk isolating the country if they do seize overall control.

“Attempts to monopolize power through violence, fear, and war will only lead to international isolation,” the charge d’affaires at the U.S. Embassy, Ross Wilson, said on Twitter.

The violence has also raised concerns in Europe of more refugees arriving there.

The Taliban controlled most of Afghanistan before they were ousted in 2001 for harboring al Qaeda chief Osama bin Laden.

A generation of Afghans who have come of age since 2001 worry that the progress made in areas such as women’s rights and media freedom over the past two decades will be lost.

The United Nations said more than 1,000 civilians had been killed in the past month, and the International Committee of the Red Cross said some 4,042 wounded people had been treated at 15 health facilities since Aug. 1.

On Wednesday, the Taliban denied targeting or killing civilians and called for an investigation.