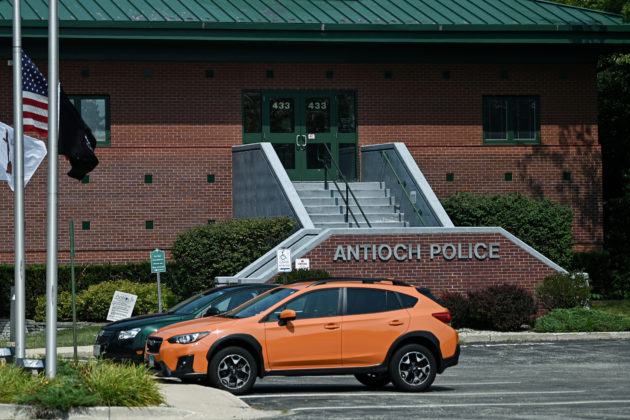 FILE PHOTO: A view of the Antioch Police Department in the hometown of suspect Kyle Rittenhouse, 17, who was arrested on a warrant and charged with first-degree intentional homicide, following the Kenosha, Wisconsin shooting of protesters, in nearby Antioch, Illinois, U.S. August 26, 2020. REUTERS/Stephen Maturen

(Reuters) – Kyle Rittenhouse, the teenager charged with killing two protesters and injuring another during demonstrations about race and justice in Kenosha, Wisconsin, will fight his requested extradition from Illinois, his lawyer told a court hearing on Friday.

Rittenhouse, 17, has been charged by Kenosha County’s district attorney with six crimes for shooting three people who tried to subdue or disarm him during protests on Aug. 25, killing 36-year-old Joseph Rosenbaum and Anthony Huber, 26.

Rittenhouse participated in the hearing at the Lake County Circuit Court in Illinois via video link from the detention facility where he is being held. He was wearing a black sweatshirt and a gray mask covered his face.

“Good morning, your honor,” he addressed the judge in his only remarks in the hearing, which lasted just a few minutes.

John Pierce, one of Rittenhouse’s lawyers, said he planned to fight the request by Kenosha prosecutors that he be transferred to Wisconsin to face the charges.

“We intend to challenge extradition by writ of habeas corpus,” Pierce said. “And so we would ask that the procedures be put in place whereby extradition documents are in fact sent from Wisconsin so we can review them.”

The teenager had traveled to Kenosha on Aug. 25 from his home in nearby Antioch, Illinois, in a self-appointed role to protect the streets of Kenosha where the police shooting of Jacob Blake had sparked unrest during protests against police brutality and racism.

Rittenhouse’s legal team have said that he feared for his life when he fired his semi-automatic rifle and was acting in self-defense. Cellphone videos from the night show chaotic scenes, including one where Rittenhouse is chased and falls down before his encounter with Huber and another man, Gaige Grosskreutz.

Huber appeared to hit Rittenhouse in the shoulder with a skateboard and tried to grab his rifle before being shot, according to the criminal complaint. Rittenhouse then pointed the rifle at Grosskreutz, who had a hand gun. Grosskreutz was shot but survived.

Rittenhouse’s lawyers have also sought to portray the case as a referendum on the right to bear arms following a summer of sometimes violent protests in major U.S. cities.

“A 17-year-old American citizen is being sacrificed by politicians, but it’s not Kyle Rittenhouse they are after,” the narrator says in a video released this week by a group tied to his legal team. “Their end game is to strip away the constitutional right of all citizens to defend our communities.”