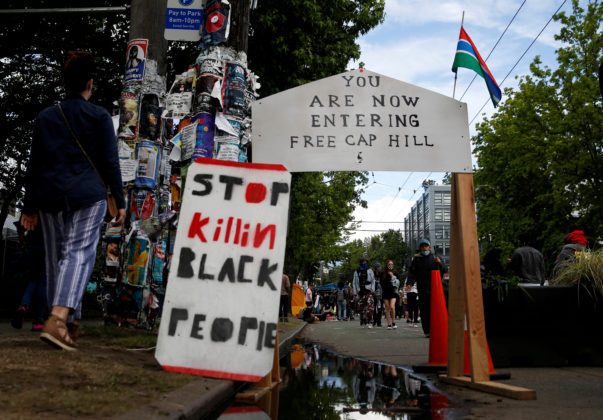 FILE PHOTO: People walk by signs at a barrier set up at the edge of the self-proclaimed CHAZ/CHOP zone around the Seattle Police Department's East Precinct as people call for the defunding of police and protest against racial inequality in the aftermath of the death in Minneapolis police custody of George Floyd, in Seattle, Washington, U.S. June 14, 2020. REUTERS/Lindsey Wasson

(Reuters) – Seattle police on Saturday said they were investigating the fatal shooting of one person and wounding of another in a part of the city occupied by activists protesting against police brutality and racial inequality across America.

The Seattle Police Department said it was investigating a shooting at 10th Avenue and East Pine inside the Capital Hill Organized Protest (CHOP) area, which has been occupied by activists without any known police presence since June 8, when Seattle police abandoned the East Precinct located there.

The police said they responded to a report of shots fired in Cal Anderson Park at about 2:30 a.m. PDT (0930 GMT) only to learn that two male victims had already been moved to Harborview Medical Center by CHOP medics.

Harborview spokeswoman Susan Gregg confirmed the hospital received two shooting victims from Capital Hill in the early hours and that one, a 19-year-old, died shortly after arrival while the other was in critical condition in intensive care.

The police said that the suspect or suspects, for which they had no description, had fled and were still at large.

The occupation of the district came as widespread protests against police abuse and injustice took place across the United States after George Floyd, a 46-year-old Black man, died while he was in Minneapolis police custody. A bystander recorded video of the officer who was charged with murder holding a knee on Floyd’s neck for nearly nine minutes.

Video footage after the Seattle shooting from Omari Salisbury, a reporter for Converge Media, showed a small group of police entering part of the protest zone on foot, holding riot shields and firearms, as occupants raised their hands and shouted at officers to drop their guns.

In a statement, the police called the protesters a “violent crowd that prevented officers safe access to the victims.”