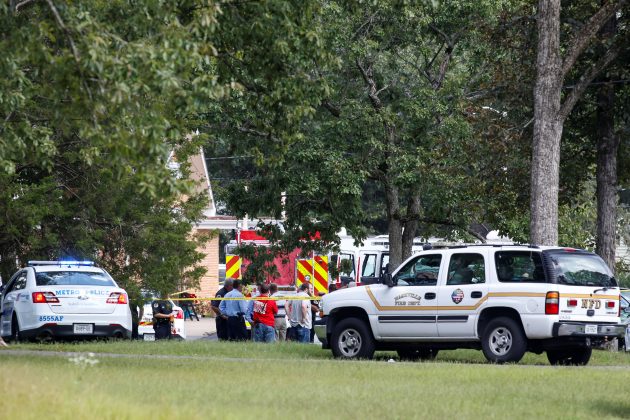 The scene where people were injured when a gunman opened fire at the Burnette Chapel Church of Christ, in Nashville, Tennessee, U.S. September 24, 2017. REUTERS/Jamie Gilliam

(Reuters) – A man accused of killing a woman in a shooting rampage at a Tennessee church this week might have acted to avenge the murders of nine black people in a South Carolina church two years ago, the Washington Post reported on Friday.

A note in the car of Emanuel Kidega Samson, 25, indicated a possible plot spurred by the fatal 2015 shootings at Emanuel AME church, a historic African-American house of worship in Charleston, the newspaper said, citing unnamed people familiar with the investigation.

Samson, who police say was wearing a mask, is accused of killing a woman in the parking lot of Burnette Chapel Church of Christ in Nashville on Sunday. He shot and wounded six worshipers in the building, before shooting himself in a scuffle with an usher, police have said.

Reuters could not immediately confirm whether investigators had found the note in Samson’s vehicle.

Representatives for the U.S. Attorney’s Office and the Federal Bureau of Investigation declined to comment. A Nashville police spokesman could not be reached for comment.

Dylann Roof, a 23-year-old avowed white supremacist, was convicted last year of 33 federal criminal counts related to the Charleston shooting, including murders as a hate crime.

Roof pleaded guilty earlier this year to separate state murder charges in the deaths of the nine black churchgoers he killed. He was sentenced to death.

Samson, who is black, was taken to jail after being treated at a hospital, police said, and was charged with criminal homicide.

Photos of events at the Nashville church posted on its Facebook page show people who appear to be from a range of ethnicities, including white people.

Federal authorities have opened a hate-crimes investigation into the Nashville shooting.

Samson lawfully bought a .22 caliber semi-automatic pistol, which was found in his sport utility vehicle after the shooting, Nashville officials said in a statement on Wednesday.

The other three firearms, including a .40 caliber semi-automatic pistol believed to have used to fire the shots at the church, were legally bought by a relative and given to Samson for safe-keeping, the statement said. An AR-15 rifle was found in the vehicle.

Samson attended the church in the past but not recently, church members told investigators, according to Nashville police.