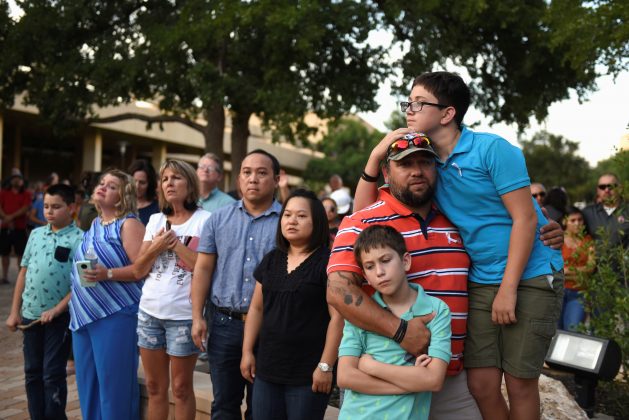 By Keith Coffman and Rich McKay

(Reuters) – The man who killed seven people and wounded 22 others in a rolling rampage across West Texas on Saturday was fired from his trucking job hours before the massacre, media and officials reported.

Details about the Labor Day weekend shooting and the names of some of the victims were emerging online and from officials on Sunday and early Monday. Police continued to comb through 15 different crime scenes in neighboring Midland and Odessa, Texas.

The gunman, identified by police as Seth Aaron Ator, 36, of Odessa, had been fired from his truck-driving job in Odessa on Saturday morning, the New York Times and other media reported.

Hours later, Ator was pulled over in Midland by Texas state troopers on Interstate 20 for failing to use a turn signal, police said.

Armed with an AR-type rifle, Ator fired out the back window of his vehicle, injuring one trooper. Then he drove away spraying gunfire indiscriminately, the Texas Department of Public Safety said in a statement.

At one point, Ator abandoned his vehicle and hijacked a U.S. postal van and mortally wounded the postal carrier, identified postal officials as Mary Grandos, 29.

Ator was later cornered by officers in the parking lot of a cinema complex in Odessa. He was shot and killed.

“There are no definitive answers as to motive or reasons at this point, but we are fairly certain that the subject did act alone,” Odessa Police Chief Michael Gerke said at a news conference.

Gerke offered his condolences to their families of the dead and wounded. 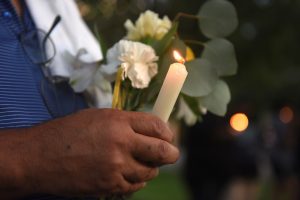 A man holds flowers and a candle as people gather for a vigil following Saturday’s shooting in Odessa, Texas, U.S. September 1, 2019. REUTERS/Callaghan O’Hare

“My heart aches for them all,” he said.

Among the dead was Grandos, who various news media reported was at the end of her shift and on the telephone with her twin sister Rosie Grandos.

“She didn’t deserve this,” a tearful Rosie Grandos said in an interview with CNN late Sunday. “I was talking to her on the phone and she said she heard gunshots but didn’t know where they were coming from.

“I heard her screaming,” she said. “I was hearing her cry and scream for help. I didn’t know what was happening.”

Rosie Grandos said got in her car and drove to her sister. By the time she arrived, she saw her sister lying on the ground, she said.

The Washington Post reported that others among the dead were Edwin Peregrino, 25, who was killed outside of the home he moved into a few weeks ago.

Also killed was Leilah Hernandez, 15, who had just celebrated a coming of age party, the newspaper reported.

Joseph Griffith, 40, was killed as he waited at a traffic light with his wife and two children, the newspaper reported.

Among the wounded was a 17-month-old girl, Anderson Davis, who was shot in the face, according to officials and an online fundraising campaign started by her family.

In numerous media interviews, her family that the child underwent surgery and will recover.

Three police officers were shot and wounded – one from Midland, one from Odessa and one state trooper – and were in stable condition.

It was the second mass shooting in Texas in four weeks. On Aug. 3, a gunman from the Dallas area killed 22 people in another Saturday shooting at a Walmart store about 255 miles (410 km) west of Midland in the city of El Paso, Texas.

(Reporting by Keith Coffman in Denver and Rich McKay in Atlanta; editing by Larry King)