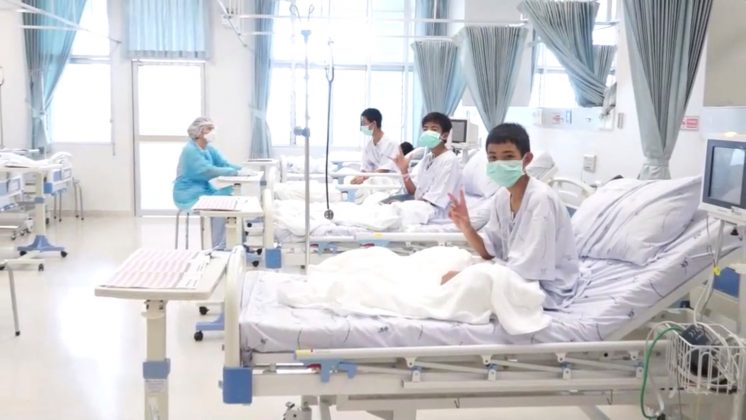 CHIANG RAI, Thailand (Reuters) – The first video of the Thai boys rescued from a flooded cave after 17 days was released on Wednesday, showing them smiling and waving from their hospital beds, looking thin but fine after an ordeal that has gripped the world.

The last group of the 12-member “Wild Boars” soccer team and their coach was brought out of the Tham Luang cave, near the border with Myanmar, on Tuesday night, safely ending a dangerous rescue and evoking international relief and joy. 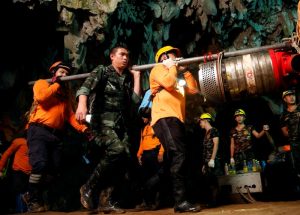 Rescue workers and soldiers take out machine after 12 soccer players and their coach were rescued in Tham Luang cave complex in the northern province of Chiang Rai, Thailand, July 10, 2018. REUTERS/Soe Zeya Tun

Rescue mission chief Narongsak Osottanakorn told a news conference the boys were just being children when they got lost and no one was to blame.

“We don’t see the children as at fault or as heroes. They are children being children, it was an accident,” Narongsak said.

A video of the boys in hospital was shown at the news conference. Some of them, wearing surgical masks, lay on their beds. Some sat and made the “peace sign” gesture for the camera.

None of the boys was heard speaking in the clips shown at the news conference.

The 12 boys and their soccer coach lost an average of 2 kg (4.4 lb) during their ordeal but were generally in good condition and showed no signs of stress, a senior health official said earlier.

After being brought out of the cave, one by one beginning on Sunday, they were taken by helicopter to hospital in the town of Chiang Rai, about 70 km (45 miles) away, to stay in quarantine.

The boys would have to stay in hospital for up to 10 days, hospital director Chaiwetch Thanapaisal told the news conference. They would then need to recuperate at home for 30 days, he said.

Parents of the first eight boys freed have been able to visit them but had to wear protective suits and stand 2 meters (7 feet) away as a precaution. Authorities are worried about the possibility of infections picked up in the cave. 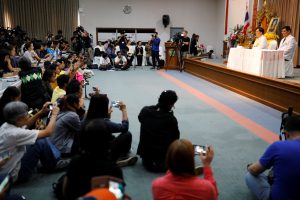 Thongchai Lertwilairattanapong, a health department inspector, earlier told reporters one from the last group rescued on Tuesday had a lung infection and they were all given vaccinations for rabies and tetanus.

Prime Minister Prayuth Chan-ocha asked that the boys be given time to recover.

“The important thing is … personal space,” Prayuth told reporters. “The best way is not to bother them and let them study.”

The group ventured into the vast cave complex in the northern province of Chiang Rai after soccer practice on June 23 and were trapped when a rainy season downpour flooded tunnels.

They were lost for nine days before British rescue divers discovered them on July 2, sitting on a ledge in a half-flooded chamber.

Getting them out – which involved teaching boys as young as 11 who were not strong swimmers to dive through narrow, submerged passages – proved a monumental challenge.

A former member of Thailand’s navy SEAL unit died during a mission in the cave on Friday.

(For a graphic on the Thai cave rescue click https://tmsnrt.rs/2KR2zRj)

Narongsak, giving details of the rescue, said falling oxygen levels inside the cave complex had added a sense of urgency.

The commander of the navy SEAL unit that oversaw the rescue, Rear Admiral Apakorn Yuukongkaew, hailed the international effort.

“We are not heroes. This mission was successful because of cooperation from everyone,” he said. “For SEALs, this is what we were trained for. The navy has a motto: ‘We don’t abandon the people’.

The rescue has dominated front-page headlines in Thailand and beyond for days.

The hashtag #Hooyah was hugely popular on social media with people showing their support for the hundreds of rescuers, including divers from around the world, who helped to get the boys out.

The fate of the boys has even resonated as far as Russia, where soccer’s World Cup is reaching its final stages. Players from France and England welcomed news of the rescue and sent their best wishes to the “Wild Boars” on Twitter.

“This victory goes to the heroes of the day, well done boys, you are so strong,” French midfielder Paul Pogba tweeted after his team beat Belgium 1-0 on Tuesday to reach the final.

Manchester City and England defender Kyle Walker, whose team faces Croatia in the second semi-final later on Wednesday, said he wanted to send shirts to the boys.

“Amazing news that all of the Thai kids are out of the cave safely!” Walker tweeted.