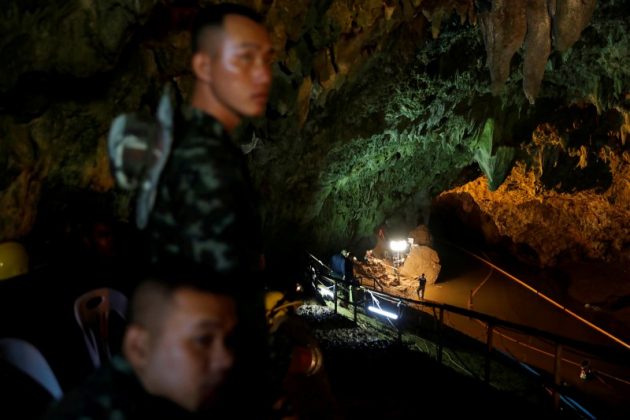 Soldiers and rescue workers work in Tham Luang cave complex, as an ongoing search for members of an under-16 soccer team and their coach continues, in the northern province of Chiang Rai, Thailand, July 1, 2018. REUTERS/Soe Zeya Tun

CHIANG RAI, Thailand (Reuters) – Rescuers in Thailand scrabbled to clear a constricted passageway for divers deep inside a flooded cave complex on Monday as the search for 12 boys and their soccer coach entered a ninth day.

The divers from a Thai navy SEAL unit were within 500 meters of a chamber containing an elevated rock mound, nicknamed “Pattaya Beach” by cavers, which could have provided the boys with a refuge when rains flooded the cave, blocking the way out.

Progress has been slow as divers need to widen parts of a narrow 100 meter stretch that they were unable to pass through without their air cylinders becoming jammed.

“This is today’s aim is to widen this hole,” Chiang Rai governor Narongsak Osatanakorn told reporters on Monday.

“As of now we have not yet reached Pattaya Beach,” he said.

The boys, aged between 11 and 16, and their 25-year-old coach disappeared on June 23 during an outing to the Tham Luang cave, which runs for 10 kilometers (6 miles) beneath the mountains in northern Chiang Rai province.

Aside from belongings left at the mouth of the cave and handprints on the walls, no trace of them has been found since.

National news bulletins have been dominated by updates from the mammoth search involving more than 1,000 personnel, including rescue teams from the United States, Britain, Japan and elsewhere.

Doctors say the boys could survive for days without food, but much would depend on whether they found water clean enough to drink. 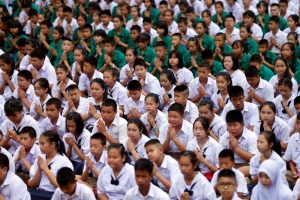 Students pray in Mae Sai Prasitsart school as an ongoing search for members of an under-16 soccer team and their coach who went missing in a flooded cave continues, in the northern province of Chiang Rai, Thailand, July 2, 2018. REUTERS/Soe Zeya Tun

The heavy seasonal rains hampered the search operation, with divers groping their way along the cave walls, barely able to see in the muddy water, but the pumps had helped to bring down water levels in recent days.

Narongsak said that an operations center has been set up in the third chamber, about 1.7 kilometers (a mile) from entrance to the cave.

Once more personnel are in place, a search will also be made of the right turn at the T-junction, he added.

As part of the rescue effort, search parties have been lowered down shafts on the mountainside, but it was unclear what progress they had made, or exactly where they were in relation to the “Pattaya Beach” chamber.

At Mae Sai Prasitsart school, where six of the missing boys studied, special prayers were held for the junior soccer team during the morning assembly on Monday. 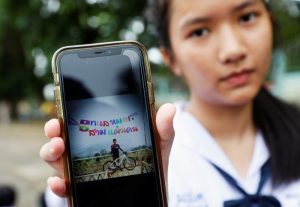 A student shows a photo of her classmate Prachak Sutham, 13, who is a member of an under-16 soccer team that went missing with their coach at a flooded cave, in Mae Sai Prasitsart school in the northern province of Chiang Rai, Thailand, July 2, 2018. REUTERS/Soe Zeya Tun

“I hope all the spirits that we cannot see please help us by releasing the 13 people who are our friends and our brothers,” teacher Takkapong Thammarangsi said as he led the prayers.

Pansa Namyi, 15, said he shared a love of sports with his friend who was among the missing.

“I want to tell him that I am waiting,” Pansa said.