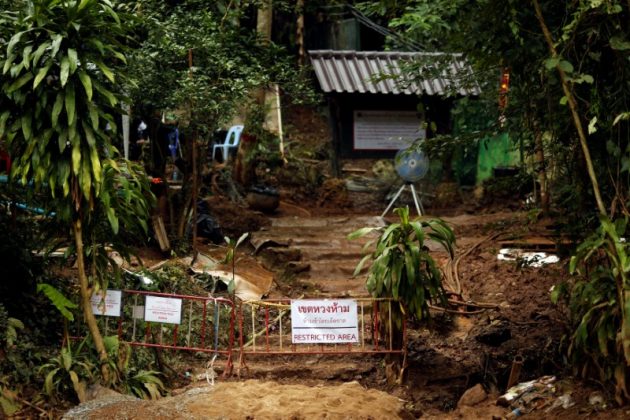 A "Restricted Area" sign is seen in front of the Tham Luang cave complex, after the rescue mission for the 12 boys of the "Wild Boars" soccer team and their coach, in the northern province of Chiang Rai, Thailand July 14, 2018. REUTERS/Tyrone Siu/File Photo

BANGKOK (Reuters) – Thai construction workers on Thursday began building a museum to commemorate the dramatic cave rescue of a boys’ soccer team in the northern province of Chiang Rai and the death of one of the divers.

The 12 boys, aged 11 to 16, and their 25-year-old coach went missing on June 23 while exploring the cave complex and were rescued more than two weeks later during a perilous three-day mission by foreign and Thai divers that gripped audiences around the world. 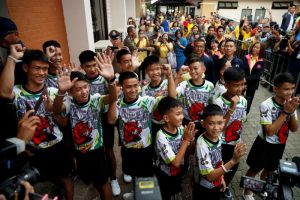 People react as the 12 soccer players and their coach who were rescued from a flooded cave arrive for their news conference in the northern province of Chiang Rai, Thailand, July 18, 2018. REUTERS/Soe Zeya Tun/File Photo

Work on the museum began after a traditional Buddhist ceremony on Wednesday at the Tham Luang cave, in which authorities asked for the blessing of local spirits.

The museum, which is expected to take about five months and 10 million baht ($300,000) to build, is being funded by a Thai artist, Chalermchai Kositpipat, a Chiang Rai native.

“This place will be very beneficial for our country, as it will commemorate the multinational cooperation and the hero who sacrificed his life. Tourists from around the world will visit this place,” Chalermchai said.

Thai diver Samarn Kunan died after he lost consciousness during a mission to place oxygen tanks deep inside the cave.

A four-meter statue of Samarn, currently being sculpted, will be placed in front of the museum.

The museum will also house a 13-metre-long painting, which features rescuers, including the British divers who first found the boys.

Eleven of the boys have been spending time as Buddhist novices to honor Samarn. On Saturday, they will leave the temple to return to normal life.