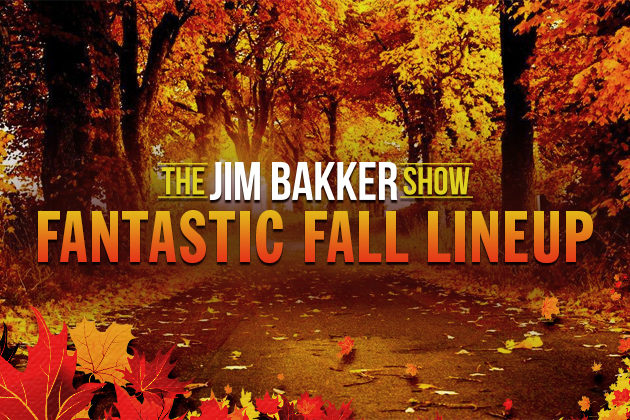 The Jim Bakker Show has been bringing an amazing group of prophets to our viewers. Each guest is filled with Biblical insight as well as important, current information on your health. This ministry has been blessed as it continues the mandate given to Jim Bakker to bring a platform for the men and women of God who are on a mission to share God’s vision, His purpose and the hope that lies in Jesus Christ.

We are not stopping here! Coming up on The Jim Bakker Show calendar:

Thursday, October 31, 11 am -Dr. Irvin Baxter
Irvin Baxter is the founder and president of Endtime Ministries. He is a television and radio talk-show host, author, publisher, and international prophecy teacher. Irvin authored A Message for the President in 1986. In the book, he identified for the first time the United States, Great Britain, Russia, and other modern nations in the Bible. He also stated that the Berlin Wall would be torn down; East and West Germany would be reunited; and that these events would be the catalyst that would propel the world into the New World Order. The Wall did come down in 1989, and we have continually heard about the New World Order ever since.

Thursday, November 7th, 11 am -Michael Gibson
MICHAEL GIBSON is an Emmy® Award-winning television personality, author, and communicator. His popular blog and podcast help thousands learn how to have relationships that count. As the grandson of relationship expert and bestselling author Gary Smalley, Michael uses his knowledge and experiences from speaking alongside his grandpa at his conferences since he was ten years old and growing up as the son of marriage pastors to call others into deeper, fuller relationships.

Tuesday, November 19th at 11 am,
Wednesday, November 20th, 11 am – Rabbi Jonathan Cahn
Jonathan Cahn is a Messianic Jewish Rabbi and pastor best known for his best-selling novel The Harbinger, in which he compares the United States and the September 11 attacks to ancient Israel and the destruction of the Kingdom of Israel. In particular, he sees Isaiah 9:10 as a prophetic warning to the United States. The Harbinger was followed with The Harbinger Companion: With Study Guide. Rabbi will be here on Grace Street to promote his incredible new book “The Oracle”. There will also be a book signing after the shows.

Friday, November 22 at 11 am – Tom Horn
Thomas Horn, a longtime television and radio personality, best‐selling author, and publisher serves as the chief executive officer of SkyWatchTV, known for it’s breaking news and in‐depth investigative reports about prophecy, conspiracies, and the supernatural. Tom will be taping live on Grace Street discussing his new book, “The Wormwood Prophecy”. Is the Wormwood star from Revelation 8 already headed toward Earth? Are NASA and high‐level government officials aware of an asteroid that is on a collision course with our planet? Is that why President Trump sanctioned a colossal increase to planetary defense? Be sure to watch for this informative and prophetic program! Tom will be having a book signing after this important show.

PTL Television Network and The Jim Bakker Show do not want you to miss a moment of the recent shows taped live during the Prophetic Encounter week. Each guest illuminated amazing information with thought-provoking insights into what is happening in our world, prophetic revelations of what is to come and shared what our part as Christians play in the Church and in daily life. We hope you will check out jimbakkershow.com to check out air dates of shows featured during the Prophetic Encounter week! We are also offering The Prophetic Encounter Conference Highlights DVD Set which features all of our guests that week for a love gift of $50. This is powerful information and inspiration that you can watch time and time again!

We hope when you are in town that you will come to one of our inspirational live tapings of The Jim Bakker Show in our studio located on Grace Street at Morningside USA. Don’t forget you can watch any of our shows on The Jim Bakker Show website as well as the PTL Television Network website. If you want to see what stations in your area offer our show, please check out our broadcast listings here.

Just a reminder…We have an amazing new app for your phone! The growth of our network is incredible and we have you to thank for tuning in! We offer classic and current Jim Bakker Show programs, Life with Lori and so many other shows by some of the most influential teachers and prophets of today. If you need instructions to download the app to your phone, please follow this link!

5 thoughts on “The Jim Bakker Show brings an amazing group of prophets to our viewers! Look what’s coming!”