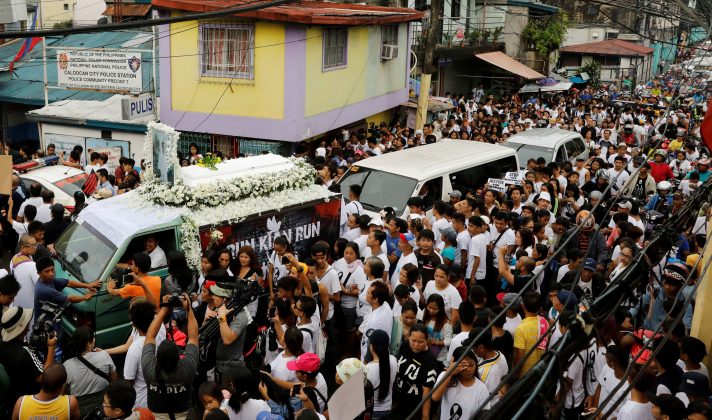 The flower-decked hearse of Kian delos Santos, a 17-year-old student who was shot during anti-drug operations, stops in front of a police station during the funeral march in Caloocan, Metro Manila, Philippines August 26, 2017. REUTERS/Erik De Castro

MANILA (Reuters) – More than a thousand people attended a funeral procession on Saturday for a Philippine teenager slain by police last week, turning the march into one of the biggest protests yet against President Rodrigo Duterte’s deadly war on drugs.

The death of Kian Loyd delos Santos has drawn widespread attention to allegations that police have been systematically executing suspected users and dealers – a charge the authorities deny.

Nuns, priests and hundreds of children, chanting “justice for Kian, justice for all” joined the funeral cortege as it made its way from a church to the cemetery where the 17-year-old was buried.

Delos Santos’ father, Saldy, spoke briefly during a mass to defend his son’s innocence and express anger over the police.

“Don’t they have a heart? I’m not sure they do. There’s a lot of churches, they should go there,” he said, his voice cracking with emotion.

Delos Santos was dragged by plain-clothes policemen to a dark, trash-filled alley in northern Manila, before he was shot in the head and left next to a pigsty, according to witnesses whose accounts appeared to be backed up by CCTV footage.

Police say they acted in self defense after delos Santos opened fire on them.

The parents and lawyers of delos Santos filed a murder complaint against the three anti-narcotics policemen on Friday.

If accepted, the complaint would follow at least two cases filed last year against police over Duterte’s war on drugs, which has killed thousands of Filipinos, outraged human rights groups and alarmed Western governments.

Delos Santos’ flower-draped coffin passed through a major highway on a small truck decorated with tarpaulins reading “Run, Kian, Run” and “Stop the killings” displayed on each side. Passing motorists honked in support.

“This is a sign that the people have had enough and are indignant over the impunity that prevails today,” Renato Reyes, secretary general of left-wing activist group Bayan (Nation), said in a statement. “The people protest the utter lack of accountability in the police force.”

Mourners, some of them wearing white shirts, held flowers and small flags, and placards denouncing the killing.

A member of Rise Up, a Manila-based coalition of church-related groups opposing the drug war, told Reuters that families of about 20 victims joined the procession.

“I came to support the family. I want justice for Kian and all victims – including my son,” said Katherine David, 35, whose 21-year-old son was shot dead by police with two other men in January.

Department of Justice personnel armed with assault rifles were on guard during the procession and outside the church.

Most people in the Philippines support the anti-drug campaign, and Duterte remains a popular leader but questions have begun to be asked since the death of delos Santos, which came during a spike in killings across the Philippines’ main island, Luzon, last week.

The president’s communication office reiterated on Saturday he will not tolerate wrongdoing by law enforcers and called on the public to “trust the justice system under the Duterte presidency.”

But bereaved mother David believes the response to Kian’s killing marks a turning point in opposition to the drug war.

“There’s been a big change. Before, police could kill and nobody paid attention. Now people are starting to show support and sympathy,” she said.