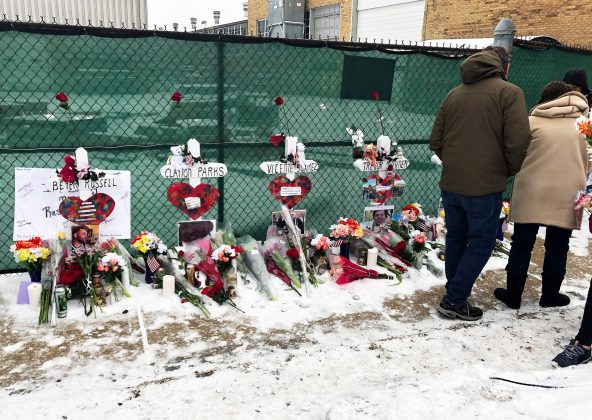 AURORA, Ill. (Reuters) – More than 2,000 people braved icy rain in sub-freezing temperatures in Illinois on Sunday for a vigil paying respects to five people killed and five police officers wounded by a factory worker who opened fire on Friday after losing his job.

Solemn mourners stood before five white crosses with the names of the dead that became a shrine to the victims bearing pictures and hand-written remembrances outside the factory where the shooting took place in Aurora, about 40 miles (64 km) west of Chicago.

“My heart is broken again for the family members of the victims,” said Mary Kay Mace, mother of the late Ryanne Mace, who was killed 11 years ago in a mass shooting at Northern Illinois University.

“I’m living proof that you can survive it, however. It’s a hard, difficult trek but it can be done,” said Mace, 55, who drove three hours from Petersburg, Illinois, and wore a university pin to honor shooting victim Trevor Wehner, a 21-year-old intern from NIU who was on his first day on the job. 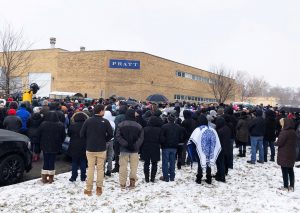 A sixth employee and five police officers responding to the scene were wounded. The gunman himself was slain about 90 minutes later in a gunfight with police who stormed the building.

Friday’s bloodshed marked the latest outbreak of gun violence in a nation where mass shootings have become almost commonplace and came a day after the first anniversary of the massacre of 17 people by a gunman at Marjory Stoneman Douglas High School in Parkland, Florida.

Several local pastors spoke and the vigil drew people of many ages.

Barbara Fultz, a 72-year-old retired woman who has been living in Aurora for more than 50 years, said her church, Main Baptist Church in Aurora, had told members about the vigil and she has a cousin who works at the Henry Pratt Company factory, a maker of industrial valves.

“It’s a tragedy all over,” Fultz said. “We’ve never had anything like this here. It’s so sad.”

“We need to come together. This is awful,” Lamos said.

The gunman was a violent felon who obtained a state permit to buy a firearm despite being legally barred from owning one, officials said.