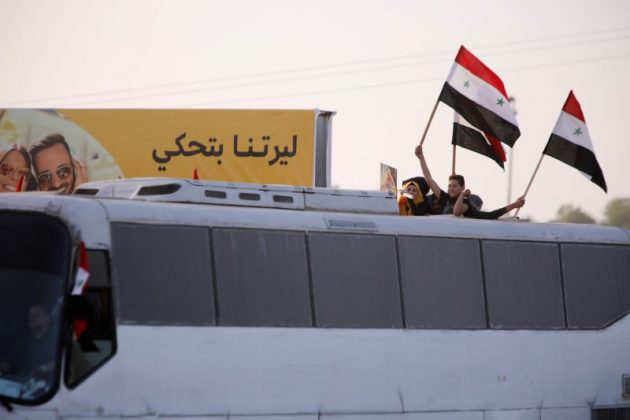 BEIRUT (Reuters) – Around 3,000 refugees in Lebanon are expected to go back to Syria in the coming week, a local official said on Thursday, a week after Lebanon said it was working with Damascus for the return of thousands of refugees who want to return.

The refugees living in a border town in northeast Lebanon will travel around 20 km (12 miles) over mountains that have separated them from their homes in Syria’s western Qalamoun region for years.

Bassel Hujeiri, mayor of Arsal town, told Reuters by phone the refugees had asked to go back to Syria.

As the Syrian army backed by Iran and Russia has recovered more territory, Lebanon’s president and other politicians have called for refugees to go back to “secure areas” before a deal to end the war. This is at odds with the international view that it is not yet safe.

Lebanon hosts around 1 million registered Syrian refugees according to the United Nations, or roughly a quarter of the population, who have fled the war since 2011. The government puts the number at 1.5 million and says their presence has strained public services and suppressed economic growth.

Hujeiri said the return would likely happen before the Eid al-Fitr holiday, which this year will fall around June 14. Eid al-Fitr marks the end of the Muslim holy month of Ramadan and depends on the sighting of the moon.

Last Thursday, the head of Lebanon’s General Security agency Major General Abbas Ibrahim told reporters that Lebanon is working with Damascus for the return of thousands of refugees who want to go back to Syria.

The U.N.’s refugee agency UNHCR told Reuters it was not involved in this transfer, but has spoken to some of the refugees as part of its global policy of making sure people who want to return home have the documentation needed to re-establish themselves and access services.

In April, several hundred refugees were bussed back to Syria from the Shebaa area of southern Lebanon in an operation overseen by General Security in coordination with Damascus.