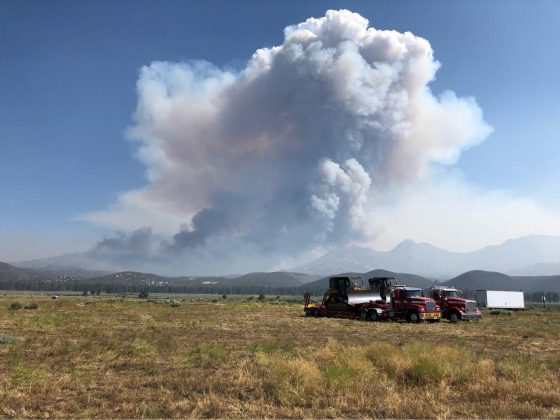 Smoke from the Cranston Fire is shown from east of Lake Hemet in Riverside County, California, U.S., July 26, 2018. USFS/Handout via REUTERS

LOS ANGELES (Reuters) – An “out of control” California wildfire prompted officials on Thursday to order thousands of residents to flee their homes as firefighters struggled to contain the blaze in a mountainous area near the city of Redding.

The Carr Fire, about 150 miles (240 km) north of Sacramento, had blackened about 20,000 acres (8,100 hectares) early Thursday, three times its last-reported size a day ago. Crews contained just 10 percent of it, the California Department of Forestry and Fire Protection said.

The conflagration is one of about 75 major wildfires burning in the United States in an unusually active fire season that has already scorched about 3.98 million acres, mostly in western states.

That is above the 10-year average for the same period of 3.54 million acres, according to the National Interagency Fire Center.

The Carr Fire is currently in a sparsely inhabited area, but Cal Fire spokesman Scott McLean warned in a phone interview that it was heading toward Redding, a city of about 90,000 people.

“If you live in West Redding start packing and be prepared!” the California Highway Patrol said on Twitter. “This fire is out of control!”

The western fires were being supercharged by extreme temperatures above 100 degrees Fahrenheit (37 Celsius), erratic winds and low humidity, factors that were expected to remain on Thursday.

Further south, the Cranston Fire, believed to have been started by arson, had charred 4,700 acres around 90 miles east of Los Angeles in the San Jacinto Mountains. It was just 5 percent contained, Cal Fire officials said.

That blaze had forced 3,200 people to evacuate in resort communities including Idyllwild, Mountain Center and Lake Hemet as it destroyed five structures and threatened 2,100 homes, the agency said.

A suspect was arrested on Wednesday and accused of starting multiple fires including the Cranston Fire, fire officials said in a statement.

A third major blaze, the almost two-week-old, 43,300-acre Ferguson Fire, forced much of Yosemite National Park to close on Wednesday, as it poured thick smoke into the valley in the Sierra Nevada Mountains some 170 miles east of San Francisco.

A firefighter died and seven others have been hurt combating the blaze, which was 27 percent contained as of Thursday morning.

(Additional reporting by Brendan O’Brien in Milwaukee and Makini Brice in Washington; Editing by Scott Malone and Tom Brown)