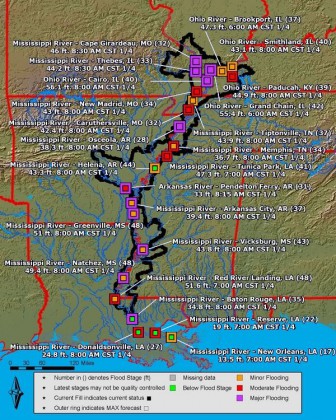 Editor’s Note: Prophet Rick Joyner warns that when you see strange and extreme weather (record breaking highs, lows, floods, droughts, tornadoes, storms), it is a prophetic sign that the Revelation Days are upon us.

Several communities in the central United States were coping with major flooding on Monday morning as the same deadly floodwaters that devastated parts of Missouri moved downstream.

The National Weather Service issued flood warnings all along the lower Ohio, Mississippi and Arkansas rivers as rising waters threatened countless homes and businesses. In certain communities, waters were expected to continue to climb throughout the month before cresting.

One week after a powerful winter storm dumped 6 to 12 inches of rain across much of the region, waters had yet to fully recede from some of the communities they impacted most.

In greater St. Louis, where often-historic flooding forced evacuations and shut down a bustling stretch of Interstate 44, the National Oceanic and Atmospheric Administration (NOAA) said minor flooding was still occurring along parts of the Meramec and Mississippi rivers. Water levels had receded from their record heights in the Missouri communities of Valley Park and Arnold, according to the NOAA, though the flooding had yet to fully stop as of Monday. It could be Saturday before the Meramec finally dropped below flood stage in Arnold., the NOAA said.

Over the weekend, Missouri Governor Jay Nixon’s announced the federal government approved his request to expedite relief efforts after “fast-rising flood water inundated several thousands homes and business and left behind a trail of destruction, debris and refuse” in greater St. Louis, according to a news release. The governor, who had declared a state of emergency and mobilized the National Guard, said the federal aid would help facilitate the cleanup and recovery process.

As some communities began to clean up, others remained partially underwater.

The NOAA reported there was major flooding occurring at 25 river gauges on Monday morning, while another 197 were experiencing minor or moderate flooding. Almost all of them were in the Mississippi River watershed, with downstream communities at risk of water levels rising further.

Major flooding was already occurring in Cape Girardeau, Missouri and the Illinois communities of Thebes and Chester, the NOAA said, and it could be several days before the flooding reduces in severity. According to Cape Girardeau’s official blog, about 25 homes in the city were either flooded or rendered inaccessible by floodwaters that had closed several of the city’s roads.

As the waters left Missouri, they were expected to arrive in Arkansas, Mississippi and Louisiana.

In Natchez, Mississippi, some 580 miles south of St. Louis, the NOAA reported the Mississippi River was already at 49.4 feet, causing minor flooding. The river was expected to rise at least 10 more feet before peaking at 60 feet on January 17, which would spur major flooding issues.

Other areas at risk of major flooding include the Mississippi communities of Vicksburg and Greenville and Arkansas City, Arkansas, according to NOAA projections. The governor of Mississippi, Phil Bryant, preemptively declared a state of emergency amid the threat of floods.

“We are told this flood will be just below the historic record flood of 2011,” Bryant said in a news release. “Our citizens have time to prepare and should begin taking actions now.”

Arkansas Governor Asa Hutchinson’s office said the governor has already declared 38 of the state’s 75 counties disaster areas as a result of storm and flooding damage, and noted the governor could add more counties to the list if the damage calls for the list to be expanded.

The Louisiana Governor’s Office of Homeland Security and Emergency Preparedness has said it would monitor levels of the Red and Mississippi rivers and assist any affected communities.