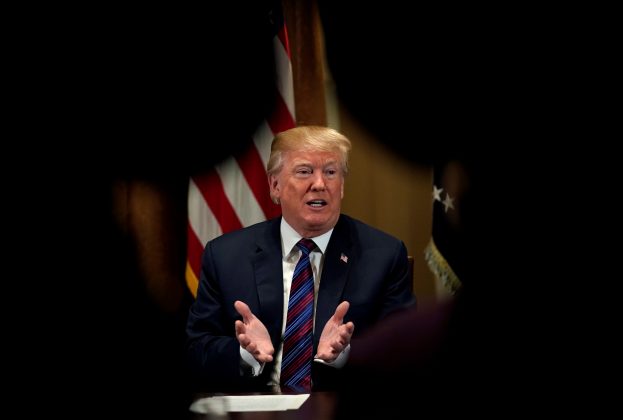 U.S. President Donald Trump speaks during a meeting with governors and members of Congress at the White House in Washington, U.S., April 12, 2018. REUTERS/Kevin Lamarque

By Tom Perry and Michelle Nichols

BEIRUT/UNITED NATIONS (Reuters) – The United States and its ally France assailed Syria’s Bashar al-Assad at the United Nations on Friday for using chemical weapons as the prospect of U.S.-led military action that could lead to confrontation with Russia hung over the Middle East.

As chemical weapons experts arrived in Syria to investigate a suspected poison gas attack by government forces, international diplomacy was in high gear to head off an escalation, though accusations flew thick and fast between Washington and its allies, and Russia, Assad’s main backer.

U.S. President Donald Trump warned on Wednesday that missiles “will be coming” in response to the toxic gas assault on April 7 that killed dozens of people in Douma, a town near Damascus which had been held by rebels until this month.

Russia says there is no evidence of a chemical attack in Douma and has warned the United States and its allies against carrying out any military strike.

While Trump himself was silent on Syria on Friday, giving no further clues on whether U.S. military action was imminent, U.S. Ambassador to the United Nations Nikki Haley said Washington estimated Assad’s forces had used chemical weapons at least 50 times during the seven-year-long Syrian conflict.

“Our president has not yet made a decision about possible action in Syria. But should the United States and our allies decide to act in Syria, it will be in defense of a principle on which we all agree,” Haley told the U.N. Security Council.

“All nations and all people will be harmed if we allow Assad to normalize the use of chemical weapons.”

There was no word from Russian President Vladimir Putin himself, though his foreign minister, Sergei Lavrov, said Moscow was in contact with Washington to discuss an atmosphere which he described as alarming.

“God forbid anything adventurous will be done in Syria along the lines of the Libyan and Iraqi experience,” Lavrov told a news conference, referring to past Western military interventions elsewhere in the region.

“Even non-significant incidents would lead to new waves of migrants to Europe and to other consequences, which neither we nor our European neighbors need,” Lavrov said.

Striking a conciliatory note, Macron’s office said: “The President of the Republic called for dialogue with Russia to be maintained and stepped up to bring peace and stability back to Syria.”

But this was balanced by a warning from the French ambassador to the United Nations, Francois Delattre, who told the Security Council that the Syrian government’s decision to use chemical weapons again meant they had “reached a point of no return”.

The world must provide a “robust, united and steadfast response”, Delattre said.

Since 2015 France has carried out air strikes against Islamic State in Syria as part of allied forces linked to the U.S.-led coalition, conducting about 5 percent of total coalition air missions.

“This is grotesque, it is a blatant lie, it is the worst piece of fake news we’ve yet seen from the Russian propaganda machine,” Pierce told reporters.

Russian Deputy Prime Minister Arkady Dvorkovich took an apparent swipe at Trump’s tweets. “We cannot depend on what someone on the other side of the ocean takes into his head in the morning. We cannot take such risks,” he said at a forum.

Vassily Nebenzia, Moscow’s U.N. ambassador, said he “cannot exclude” war between the United States and Russia. “The immediate priority is to avert the danger of war,” he told reporters. “We hope there will be no point of no return.”

U.S. allies have offered strong words of support for Washington but no clear military plans have yet emerged.

British Prime Minister Theresa May won backing from her senior ministers on Thursday to take unspecified action with the United States and France to deter further use of chemical weapons by Syria.

Some other of Trump’s European allies are anxious to avert a U.S.-Russian showdown. Apart from Macron’s phone conversation with Putin, NATO members Germany and the Netherlands have said they will not take part in any military action.

Tayyip Erdogan, president of Syria’s neighbor Turkey which is also in NATO, said on Friday he had spoken by phone with Trump and Putin and told both that increasing tension in the region was not right.

A first team of experts from the global Organisation for the Prohibition of Chemical Weapons has arrived in Syria, U.N. Secretary-General Antonio Guterres said.

The investigators, who are only mandated to determine if chemical weapons were used and not who used them, were expected to start their investigations into the Douma incident on Saturday, the Netherlands-based agency said.

In Geneva, U.N. war crimes investigators condemned on Friday the suspected use of chemical weapons in Douma and called for evidence to be preserved with a view to future prosecutions.

Trump himself appeared on Thursday to cast doubt on at least the timing of any U.S.-led military action, tweeting: “Never said when an attack on Syria would take place. Could be very soon or not so soon at all!”

Global stock markets have had a whipsaw week, largely fueled by Trump’s tendency to change his mind over top policy issues.

The capture of Douma has clinched a major victory for Assad, crushing what was once a center of the insurgency near Damascus, and underlines his unassailable position in the war.

Assad, who is supported by Iranian-back fighters as well as the Russian air force, has cemented his control over most of the western, more heavily populated, part of the country. Rebels and jihadist insurgents are largely contained to two areas along Syria’s northern and southern borders.