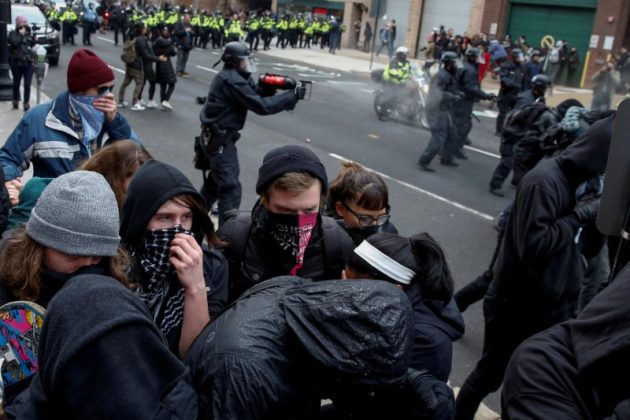 File Photo - Protesters demonstrating against U.S. President Donald Trump take cover as they are hit by pepper spray by police on the sidelines of the inauguration in Washington, DC, U.S. on January 20, 2017. REUTERS/Adrees Latif/File Photo

(Reuters) – The American Civil Liberties Union sued police in the nation’s capital on Wednesday on behalf of three people detained during the U.S. presidential inauguration, claiming they were subjected to unconstitutional arrests, excessive force and police abuse.

More than 200 people were arrested in Washington in January after some black-clad activists among those protesting Donald Trump’s swearing-in clashed with police a few blocks from the White House, in an outburst of violence rare for an inauguration.

The lawsuit against the Metropolitan Police Department, the District of Columbia and individual officers claims the plaintiffs broke no laws at the protests and endured abuses including being pepper-sprayed and denied food and water for hours.

The plaintiffs include two individuals who came to the District of Columbia to express their views concerning the inauguration and a photojournalist who covered the demonstrations.

“The MPD’s extreme tactics against members of the public, including journalists, demonstrators, and observers, were unjustifiable and unconstitutional,” Scott Michelman, senior staff attorney for the ACLU-DC, said in a statement.

Since Trump’s election win, a number of demonstrations in U.S. cities have highlighted strong discontent over his comments and policy positions toward a wide range of groups, including Mexican immigrants, Muslims, the disabled and environmentalists.

Washington’s police department said in a statement “all instances of use of force by officers and allegations of misconduct at the inauguration will be fully investigated,” and that it will support the legal process.

It added officers worked diligently to protect the rights of thousands who came to the inauguration to peacefully express their views.

“Unfortunately, there was another group of individuals who chose to engage in criminal acts, destroying property and hurling projectiles, injuring at least six officers. These individuals were ultimately arrested for their criminal actions,” it said.

It also said demonstrator Elizabeth Lagesse was peacefully protesting when she was arrested and handcuffed so tightly that her wrists bled.

(This story corrects number of people suing Washington D.C. in headline and paragraphs 1 and 4.)