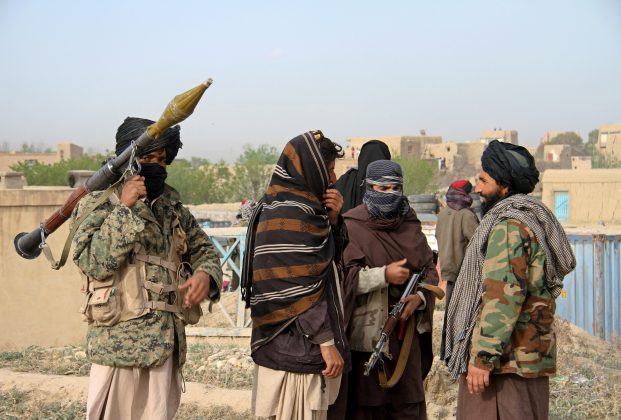 Members of the Taliban gather at the site of the execution of three men accused of murdering a couple during a robbery in Ghazni province, Afghanistan April 18, 2015. REUTERS/Stringer/File Photo

By Hamid Shalizi and Josh Smith

KABUL (Reuters) – Afghan and American officials are increasingly worried that any deepening of ties between Russia and Taliban militants fighting to topple the government in Kabul could complicate an already precarious security situation.

Russian officials have denied they provide aid to the insurgents, who are contesting large swathes of territory and inflicting heavy casualties, and say their limited contacts are aimed at bringing the Taliban to the negotiating table.

Leaders in Kabul say Russian support for the Afghan Taliban appears to be mostly political so far.

But a series of recent meetings they say has taken place in Moscow and Tajikistan has made Afghan intelligence and defence officials nervous about more direct support including weapons or funding.

He told reporters at a briefing in Washington last week that Russia had joined Iran and Pakistan as countries with a “malign influence” in Afghanistan, and said Moscow was lending legitimacy to the Taliban.

Russia’s ambassador to Kabul, Alexander Mantytskiy, told reporters on Thursday that his government’s contacts with the insurgent group were aimed at ensuring the safety of Russian citizens and encouraging peace talks.

“We do not have intensive contacts with the Taliban,” he said through an interpreter, adding that Russia favored a negotiated peace in Afghanistan which could only happen by cultivating contacts with all players, including the Taliban.

Mantytskiy expressed annoyance at persistant accusations of Russian collaboration with the Taliban, saying the statements by American and Afghan officials were an effort to distract attention from the worsening conflict.

“They are trying to put the blame for their failures on our shoulders,” he told Reuters.

Afghanistan has long been the scene of international intrigue and intervention, with the British and Russians jockeying for power during the 19th Century “Great Game,” and the United States helping Pakistan provide weapons and funding to Afghan rebels fighting Soviet forces in the 1980s.

Taliban officials told Reuters that the group has had significant contacts with Moscow since at least 2007, adding that Russian involvement did not extend beyond “moral and political support”.

“We had a common enemy,” said one senior Taliban official. “We needed support to get rid of the United States and its allies in Afghanistan and Russia wanted all foreign troops to leave Afghanistan as quickly as possible.”

Moscow has been critical of the United States and NATO over their handling of the war in Afghanistan, but Russia initially helped provide helicopters for the Afghan military and agreed to a supply route for coalition materials through Russia.

Most of that cooperation has fallen apart as relations between Russia and the West deteriorated in recent years over the conflicts in Ukraine and Syria.

In recent months, Taliban representatives have held several meetings with Russian officials, according to Taliban and Afghan government sources.

Another recent meeting occurred in Moscow itself, according to an official at the presidential palace in Kabul.

Earlier this week Afghan lawmakers said they planned to investigate reports of Russian aid to the Taliban, and had sent a letter to Moscow seeking clarification.

Afghan officials did not produce evidence of direct Russian aid, but recent cross-border flights by unidentified helicopters and seizures of new “Russian-made” guns had raised concerns that regional actors may be playing a larger role, Jangalbagh said.

“If the Taliban get their hands on anti-aircraft guns provided, for example, by Russia, then it is a game-changer, and forget about peace,” said another senior Afghan security official.

According to Afghan and U.S. officials, Russian representatives have maintained that government security forces, backed by U.S. special forces and air strikes, have not done enough to stem the growth of Islamic State in Afghanistan.

Militants loyal to the radical Middle East-based network have carved out territory along the border with Pakistan, and have found themselves fighting not only Afghan and foreign troops, but also the Taliban, who compete for land, influence, and fighters.

Taliban officials dismissed the idea that their ties to Russia had anything to do with fighting Islamic State.

“In early 2008, when Russia began supporting us, ISIS(Islamic State) didn’t exist anywhere in the world,” the senior Taliban official said. “Their sole purpose was to strengthen us against the U.S. and its allies.”

That was echoed by Taliban spokesman Zabihullah Mujahid, who said “ISIS is not an issue”.

Nicholson said the talk of Islamic State is a smokescreen designed to justify Russian policies.

“Their (Russia’s) narrative goes something like this: that the Taliban are the ones fighting Islamic State, not the Afghan government,” Nicholson said.

“So this public legitimacy that Russia lends to the Taliban is not based on fact, but is used as a way to essentially undermine the Afghan government and the NATO efforts and bolster the belligerents.”

(Additional reporting by Jibran Ahmad in Pakistan and Tatiana Ustinova and Andrew Osborn in Moscow; Editing by Mike Collett-White)