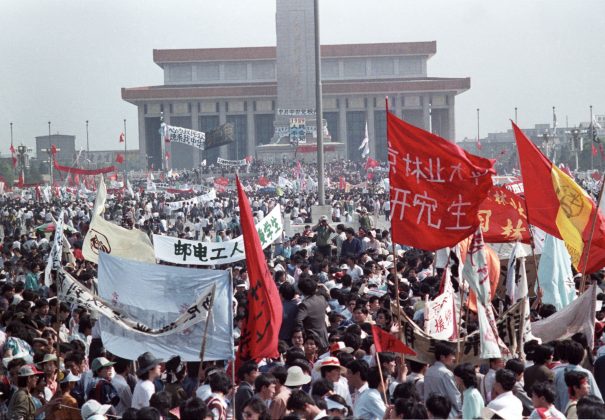 FILE PHOTO: Hundreds of thousands of people fill Beijing's central Tiananmen Square, China, May 17, 1989 in front of the Monument to the People's Heroes and Mao's mausoleum. REUTERS/Ed Nachtrieb/File Photo

BEIJING (Reuters) – Next Tuesday, June 4, marks 30 years since China bloodily suppressed pro-democracy demonstrations in and around central Beijing’s Tiananmen Square, when Chinese troops opened fire on their own people.

The event remains a taboo topic of discussion in China and will not be officially commemorated by the ruling Communist Party or government. 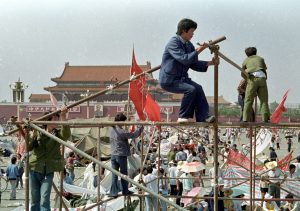 FILE PHOTO: Student protesters construct a tent to protect them from the elements in Tiananmen Square in Beijing, China, May 26, 1989. REUTERS/Shunsuke Akatsuka/File Photo

Here are some landmark dates leading up to the demonstrations and the crackdown that followed:

April 15, 1989: A leading reformer and former Communist Party chief Hu Yaobang, dies. His death acts as a catalyst for unhappiness with the slow pace of reform, as well as corruption and income inequality.

April 17: Protests begin at Tiananmen Square, with students calling for democracy and reform. Crowds of up to 100,000 gather, despite official warnings.

April 22: Some 50,000 students gather outside the Great Hall of the People as Hu’s memorial service is held. Three students attempt to deliver a petition to the government, outlining their demands, but are ignored. Rioting and looting take place in Xian and Changsha.

April 27: Around 50,000 students defy authorities and march to Tiananmen. Supporting crowds number up to one million.

May 2: In Shanghai, 10,000 protesters march on city government headquarters.

May 4: Further mass protests coinciding with the anniversary of the May 4 Movement of 1919, which was another student and intellectual-led movement for reform. Protests coincide with meeting of Asian Development Bank in Great Hall of the People. Students march in Shanghai and nine other cities.

May 13: Hundreds of students begin a hunger strike on Tiananmen Square.

May 15-18: To China’s embarrassment, protests prevent traditional welcome ceremony outside the Great Hall of the People for the state visit of reformist Soviet leader Mikhail Gorbachev. Students welcome Gorbachev as “The Ambassador of Democracy”.

May 19: Party chief Zhao Ziyang visits students on Tiananmen Square, accompanied by the hardline then-premier Li Peng and future premier Wen Jiabao. Zhao pleads with the students protesters to leave, but is ignored. It is the last time Zhao is seen in public. He is later purged.

May 20: Li declares martial law in parts of Beijing. Reviled by many to this day as the “Butcher of Beijing”, Li remained premier until 1998.

May 30: Students unveil the 10-metre (33 ft) high “Goddess of Democracy”, modeled on the Statue of Liberty, in Tiananmen Square.

June 3: Citizens repel a charge towards Tiananmen by thousands of soldiers. Tear gas and bullets used in running clashes a few hundred meters (yards) from the square. Authorities warn protesters that troops and police have “right to use all methods”.

June 4: In the early hours of the morning tanks and armored personnel carriers begin their attack on the square itself, clearing it by dawn. About four hours later, troops fire on unarmed civilians regrouping at the edge of the square.

June 5: An unidentified Chinese man stands in front of a tank convoy leaving Tiananmen Square. The image spreads around the world as a symbol of defiance against the crackdown.

June 6: Chinese State Council spokesman Yuan Mu says on television that the known death toll was about 300, most of them soldiers with only 23 students confirmed killed. China has never provided a full death toll, but rights groups and witnesses say the figure could run into the thousands.