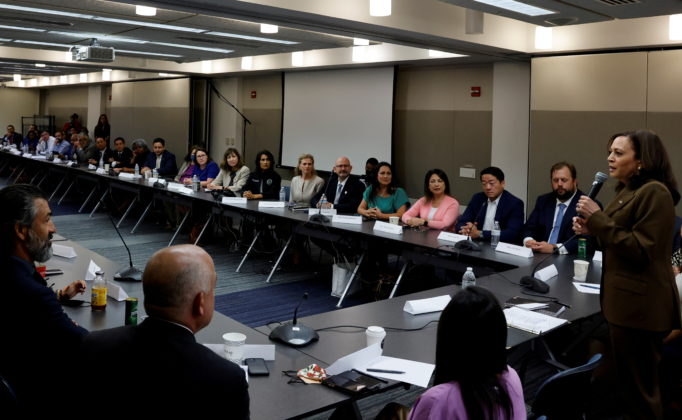 (Reuters) -In a bid to thwart legislation she fears will make it harder for Texans to vote, Erin Zwiener fled the state with dozens of her fellow Democrats in the state legislature – and one young companion.

“Every member is having to make different considerations to be here,” Zwiener said. “For me, that meant bringing my three-year-old daughter with me, because we don’t have very solid childcare arrangements at home.”

So she had no time to linger on Tuesday after meeting with Vice President Kamala Harris in Washington, where the Texas Democrats are holding out.

“I need to relieve my babysitter, ok?” she shouted into her phone as she hustled into a rideshare with a gaggle of staffers. Her daughter, Lark, was being watched by a friend.

More than 50 Democratic members of the Texas House of Representatives fled their state on Monday to deny that body a quorum to vote on an elections bill.

Republicans in Texas argue their voting bill will make it easier for people to cast ballots, for instance by forcing businesses to give people time off to go vote. Their bill is one of several such measures being pushed in conservative states in the wake of former President Donald Trump’s claim that he lost last year’s election because of fraud.

The Democrats vow to remain outside Texas for the duration of a special legislative session that runs through Aug. 7, and even longer if more sessions are called.

On Wednesday, they planned to meet with at least six Democratic U.S. senators, including Raphael Warnock of Georgia and Elizabeth Warren of Massachusetts.

A spokesperson for the lawmakers said they were in talks also to meet with Senator Joe Manchin, a moderate Democrat whose support is critical to passing voting rights legislation and other bills high on the agenda of President Joe Biden, also a Democrat.

Texas Governor Greg Abbott said he would have the Democratic lawmakers arrested when they return and force them to remain at the state Capitol to carry out the session.

But none of the Democrats interviewed seemed concerned about that.

“The best policy is to ignore a bully when they bluster,” Zwiener said.

She and other Texas Democrats said they were more concerned about logistical and personal hurdles.

Representative Celia Israel was going to marry her partner Celinda Garza on the House floor this week – but delayed the nuptials to flee the state. Many House members care for elderly parents or are parents who have left children behind with spouses. Others run businesses that are now left rudderless.

Texas representatives make $7,200 a year for the job. Most will struggle to afford a long stay in Washington.

Wu said the Texas House Democratic Caucus Committee used donor and member money to fund the group’s flight to Washington. It is also covering food and hotel costs, but that was expected to end within days.

“We are going to need more money to stay,” Wu said. “More than that, we need funds to combat this push by Republicans to pass this legislation around the nation.”

Former presidential candidate and former Texas congressman Beto O’Rourke and other Democratic leaders are firing up fundraising efforts to help pay for hotel rooms and food.

Representative Gina Hinojosa left a nine-year-old and 15-year-old in Austin.

“I have mom guilt about leaving,” she said. “The absence of family here with me is the hardest part of this.”