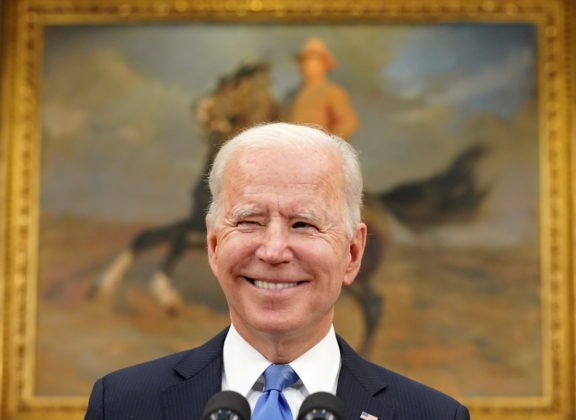 U.S. President Joe Biden smiles at a question from a reporter after speaking about the Colonial Pipeline shutdown in the Roosevelt Room of the White House in Washington, U.S., May 13, 2021. REUTERS/Kevin Lamarque

(Reuters) -U.S. President Joe Biden on Thursday said that U.S. motorists can expect filling stations to begin returning to normal this weekend even as shortages gripped some areas amid restart of the top U.S. fuel pipeline after it was shut by a ransomware attack.

The Colonial Pipeline, which carries 100 million gallons per day of gasoline, diesel and jet fuel, will take some time to fully recover and could still suffer “hiccups,” he said. Colonial began supplying some fuel to most regions along its 5,500 mile (8,850 km) route.

The pipeline’s restart should bring supplies to some hard-hit areas as soon as Thursday, said U.S. Energy Secretary Jennifer Granholm.

Motorists’ tempers frayed as panic buying led stations to run out even where supplies were available. On Thursday about 70% of gas stations in North Carolina were without fuel, while around 50% of stations in Virginia, South Carolina and Georgia had outages, tracking firm GasBuddy said.

The average national gasoline price rose above $3.00 a gallon, the highest since October 2014, the American Automobile Association said, and prices in some areas jumped as much as 11 cents in a day.

Nicole Guy, 36, a leasing agent in Atlanta, was at her fourth gas station Thursday morning, trying to find gas. The station ran out of gas early Wednesday and the manager wasn’t sure when deliveries would resume.

Guy said she wished she had gone out the night before to refuel.

“My sister paid $3.50 at the pump last night for her car,” she said. “I thought if I went looking today I’d find a better deal. I never paid that much at the pump.”

Even as the pipeline resumes pumping, it will take time to replenish stocks. Gasoline inventories in the Northeast likely will fall to five-year lows this week, said Richard Joswick, an analyst with S&P Global Platts.

As FBI cyber sleuths dug into an attack that paralyzed a large part of the U.S. energy infrastructure, the group believed to be responsible said it was publishing data from breaches at three other companies, including an Illinois technology firm.

Biden on Thursday said officials do not believe the Russian government was involved in this attack.

“But we do have strong reason to believe that the criminals who did the attack are living in Russia,” he said. “That’s where it came from.”

U.S. House of Representatives Speaker Nancy Pelosi on Thursday urged companies that are victims of cyberattacks not to pay a ransom.

Colonial has not publicly said how much money the hackers were seeking or whether it paid the ransom. Colonial has a type of insurance that typically covers ransom payments, three people familiar with the matter told Reuters on Thursday.

The U.S. also issued a waiver to an undisclosed shipper allowing it to transport gasoline and diesel from the U.S. Gulf Coast to East Coast ports on foreign-flagged vessels. The U.S. restricts deliveries between domestic ports to U.S.-built and crewed vessels.

Gulf Coast refiners that move fuel to market on the Colonial Pipeline had cut processing as an alternative pipeline filled to capacity last weekend. Total SE trimmed gasoline production at its Port Arthur, Texas, refinery and Citgo Petroleum pared back at its Lake Charles, Louisiana, plant.

Royal Dutch Shell Plc on Thursday said it was seeking alternative supply points to tackle challenges from the incident.

Airlines were refueling planes at their destinations, instead of usual departure points. On Wednesday, Delta Air Lines Chief Executive Ed Bastian said more fuel would be available “hopefully by the end of the week and as long as those predictions come true, hopefully we’ll be OK.”