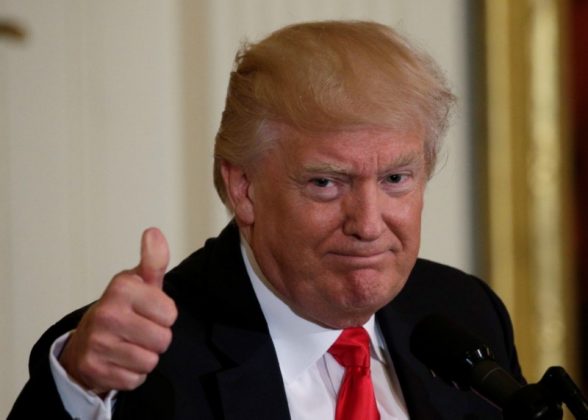 U.S. President Donald Trump gestures while attending a “celebration of military mothers" at the White House in Washington, U.S., May 12, 2017. REUTERS/Kevin Lamarque

WASHINGTON (Reuters) – President Donald Trump on Saturday is set to deliver the commencement address – his first as president – to Liberty University, the nation’s largest Christian college, where he is expected to find to a friendly audience after a week of turmoil in Washington.

Trump has been closeted in the White House all week, making only a few, brief public appearances after he took the highly unusual and fraught step of abruptly firing James Comey as FBI director on Tuesday.

Dismissing the head of the Federal Bureau of Investigation at a time when the agency probes alleged Russian meddling in the 2016 election has overshadowed Trump’s push to boost jobs through tax reform and a massive infrastructure program.

The Lynchburg, Virginia, college should provide a receptive crowd for Trump’s economic message. He campaigned there during his run for office and was bolstered by the endorsement of its president, Jerry Falwell Jr., who helped secure support from religious conservatives.

“He’s going to tell them what he wants to do to make their careers run more smoothly and make it easier for them to raise families,” Falwell told WDBJ7, a CBS television affiliate in Roanoke, Virginia, about Trump’s message to graduates.

“I’ve been working with his speech writers and I think he’s going to deliver a wonderful speech that will be personal to Liberty,” Falwell said in the interview.

Trump has expressed frustration that the Russia probe has loomed over his presidency. He insisted this week that he fired Comey over his performance, not because of the investigation, but the timing of the dismissal and his comments afterward have raised alarms with his critics.

Trump, who has been preparing for his first foreign trip to the Middle East and Europe late next week, also will deliver the commencement address to the United States Coast Guard Academy in New London, Connecticut, on Wednesday.

“To young Americans at both schools, I will be bringing a message of hope and optimism about our nation’s bright future,” Trump said in his weekly address to the nation.

Trump will encourage students to “be a force for good in the world by standing up for the values that Liberty has taught them,” White House spokesman Sean Spicer said.

Liberty University said it expects more than 7,000 of its 18,000 graduates to participate in the ceremonies, most of whom earned their degree online. Past commencements have attracted as many as 40,000 people, the college said.

One thought on “After tough week, Trump looks for a lift at Liberty University”