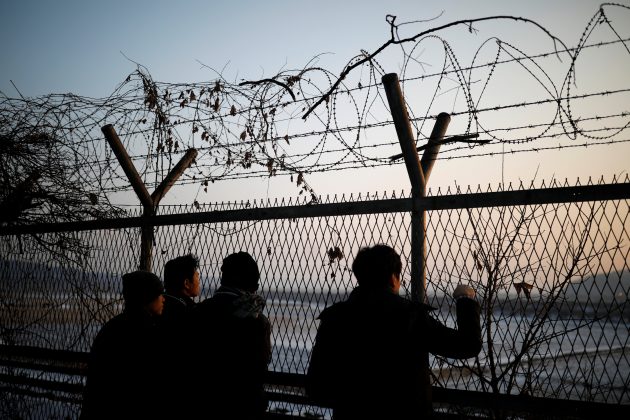 People look toward the north through a barbed-wire fence near the militarized zone separating the two Koreas, in Paju, South Korea, December 21, 2017. REUTERS/Kim Hong-Ji

SEOUL (Reuters) – Newly proposed sanctions on North Korea could have a significant effect on the isolated country’s already struggling economy, analysts said ahead of an expected U.N. Security Council vote on Friday, which will hinge on support from China and Russia.

Tensions have been rising over North Korea’s nuclear and missile programs, which it pursues in defiance of years of different U.N. Security Council resolutions, with bellicose rhetoric from the North and the White House.

But U.S. diplomats have made clear they are seeking a diplomatic solution and have proposed a number of new, tougher sanctions designed to ratchet up pressure on North Korean leader Kim Jong Un.

North Korea regularly threatens to destroy South Korea, the United States and Japan and says its weapons programs are necessary to counter U.S. aggression. The United States stations 28,500 troops in the South, a legacy of the 1950-53 Korean War.

He said Trump was seeking “total subordination of the whole world”.

The draft U.N. resolution, seen by Reuters on Thursday, seeks to ban nearly 90 percent of refined petroleum product exports to North Korea by capping them at 500,000 barrels a year and demand the repatriation of North Koreans working abroad within 12 months.

It would also cap crude oil supplies to North Korea at 4 million barrels a year, as well as ban a number of North Korean exports such as machinery, lumber, and other products and resources.

“If they were enforced, the cap on oil would be devastating for North Korea’s haulage industry, for North Koreans who use generators at home or for productive activities, and for (state-owned enterprises) that do the same,” said Peter Ward, a columnist for NK News, a website that tracks North Korea.

The forced repatriation of foreign workers would also cut off vital sources of foreign currency and investment not only for the government but also for North Korea’s emerging market economy, he said.

“If such sanctions were enforced, they would thus impede and endanger North Korea’s economic development.”

Asked about the effects of sanctions before these latest proposals were announced, Michael Kirby, who led a U.N. inquiry into human rights abuses in North Korea, said cutting off fuel imports would be “a very serious step”.

“Cutting off oil, petroleum supplies would obviously have a very big impact on the ordinary population,” he said.

China, which supplies most of North Korea’s oil, has backed successive rounds of U.N. sanctions but has resisted past U.S. calls to cut off supplies to its neighbor.

While not directly addressing the new proposals, Hua said that China would maintain communications with all sides and supports measures to “quickly create the necessary conditions to peacefully resolve the Korean Peninsula nuclear issue through talks”.

Any move to curb exports of Chinese fuel to North Korea may have limited impact after China National Petroleum Corp suspended diesel and gasoline sales to its northern neighbor in June over concerns the state-owned company would not get paid.

Business has slowed steadily since then, with zero shipments of diesel, gasoline and other fuel from China in October. November data will be released on Monday.

Russia quietly boosted economic support for North Korea earlier this year, and last week Russian Deputy Foreign Minister Igor Morgulov said that Moscow was not ready to sign up to new sanctions that would strangle the country economically.

China and Russia on Thursday asked for more time to consider a U.S. proposal to blacklist 10 ships for transporting banned items from North Korea, diplomats said. It was unclear how much more time would be given.

Even if the proposed sanctions have an economic effect, it’s not clear whether that would push Pyongyang to negotiate or stop its weapons development, said Kim Sung-han, a former South Korean vice foreign minister.

“We have had numerous – sometimes so-called toughest – sanctions against North Korea over the past 25 years,” he said. “Almost none have worked effectively to halt the regime’s military and nuclear ambitions.”

The additional sanctions would come as South Korean President Moon Jae-in seeks to ease tensions ahead of the 2018 Pyeongchang Winter Olympics in February. He has proposed delaying annual joint military drills with the United States, which North Korea sees as a preparation for invasion, until after the Games.

A foreign ministry spokesperson declined to comment until after the Security Council vote on the resolution on Friday, but an official at South Korea’s Unification Ministry said Seoul supported global efforts to rein in North Korea even as it tries to use the Olympics as a catalyst for peace negotiations.

“The North should have its own thinking about whether or not to participate in the Olympics (regardless of sanctions),” the Unification Ministry official told Reuters. “If it were to come, it would make a decision at the last minute. Until then we will continue to wait and see.”

Seoul has also sought to repair relations with China, which were damaged when Beijing complained over the deployment of an American anti-missile system in South Korea.

Officials at foreign ministries in both Seoul and Beijing have denied reports by travel agents that some Chinese tour groups are still begin blocked from traveling to South Korea.

“As far as I am aware, according to the information I have before me, these reports are not in accord with the facts,” Hua said on Friday.

While Trump and North Korean leader Kim have publicly derided negotiations as useless without major policy shifts by the other side, Seoul has continued a slightly softer approach, while still supporting international pressure.

“If we get to meet the North side, we are willing to have frank, active discussions on various issues that are of North Korea’s interest, without any preconditions,” South Korean Unification Minister Cho Myoung-gyon told reporters in Seoul.

“Next year, we would pursue our policy in a more proactive manner than this year, making use of various opportunities, including the Pyeongchang Olympics.”