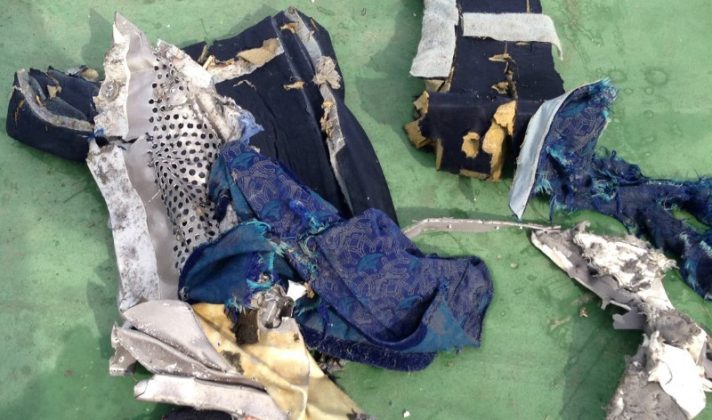 Part of a plane chair among recovered debris of the EgyptAir jet that crashed in the Mediterranean Sea is seen in this handout image released May 21, 2016 by Egypt's military. Egyptian Military/Handout via Reuters

By Lin Noueihed and Tim Hepher

CAIRO/PARIS (Reuters) – Egyptian investigators said on Thursday traces of explosives had been found on the remains of victims of an Egyptair flight that crashed en route from Paris to Cairo, but French officials warned against drawing conclusions on the cause of the crash.

Flight MS 804 plunged into one of the deepest parts of the Mediterranean Sea on May 19, killing all 66 people on board.

Egypt’s investigation committee issued a statement saying the coroner had found traces of explosives on the remains of some victims. It gave no more details but said its findings were sent to prosecutors investigating foul play.

“The technical investigation committee … places itself and its expertise at the disposal of prosecutors,” it said.

A judicial source said the prosecution had not received details about the explosives traces but would include the coroner’s findings in its inquiries.

An Egyptian source familiar with the matter said Egypt had informed France months ago about its findings but French investigators had requested more time to study them.

“That is why it took so long to make an announcement,” the source said, declining to be named as the investigation is continuing.

Paris newspaper Le Figaro reported in September that French investigators had seen traces of TNT on the plane’s debris but were prevented from further examining it. Egyptian officials denied at the time obstructing French inquiries.

France has hinted at its frustration at the pace of the investigation but has stopped short of openly criticising Cairo, with which it enjoys broadly positive relations and which has ordered French Rafale fighter jets.

France’s foreign ministry said the causes were still being investigated and appeared to hint that it had been kept at arm’s length.

“France, like it has been from the beginning of this tragic accident, remains at the disposal of the relevant Egyptian authorities to contribute to this investigation, including with the means of its experts,” it said.

In a rare statement on an ongoing foreign investigation, France’s BEA air crash investigation agency said on Thursday no conclusions could be drawn on what might have caused the crash.

“In the absence of detailed information on the conditions and ways in which samples were taken leading to the detection of traces of explosives, the BEA considers that it is not possible at this stage to draw conclusions on the origin of the accident,” a spokeswoman said.

The BEA is accredited to the Egyptian-led investigation because the Airbus aircraft was designed and built in France.

Two Western sources briefed on the investigation expressed reservations about the explosives findings and said a technical cause remained the most likely. The pattern of wreckage also suggested the plane hit the sea intact at high speed, they said.

One of the sources said the traces of explosives reportedly found appeared to be identical to samples previously held in stock, whereas there would usually be tiny forensic differences. Neither source agreed to be identified because of the sensitivity of the matter.

Audio from the flight recorder mentions a fire on board the plane in its final moments and analysis of the flight data recorder showed smoke in the lavatory and avionics bay.

The Paris prosecutor’s office opened a manslaughter investigation in June but said it was not looking into terrorism as a possible cause at that stage.

No group has claimed responsibility for the crash.

In October 2015, a bomb brought down a Metrojet plane carrying Russian holidaymakers home from the Red Sea resort of Sharm al-Sheikh, killing all 224 people on board.

Islamic State claimed responsibility for that attack, saying it smuggled aboard explosives in a soft drink can.