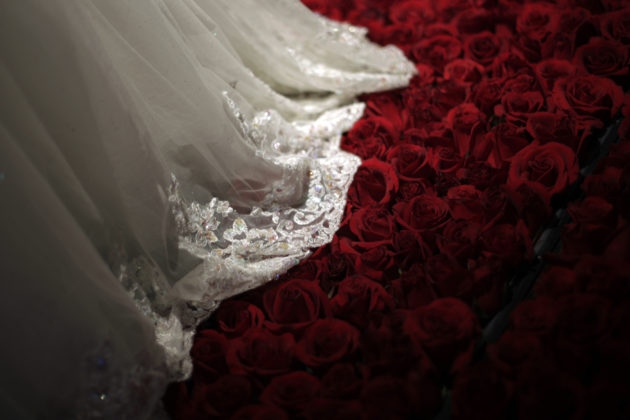 A wedding dress is displayed during a group wedding ceremony hosted by the French Pavilion at the Shanghai World Expo May 11, 2010. Thirty four couples participated in the ceremony held inside the pavilion's classical French-style gardens. One lucky couple will be chosen in a lottery to honeymoon in the French city of Tours and the Loire Valley, according to France's official Expo website. REUTERS/Aly Song (CHINA - Tags: SOCIETY TRAVEL)

PHNOM PENH (Thomson Reuters Foundation) – Coronavirus travel restrictions have forced anti-trafficking groups to suspend rescue operations of Vietnamese and Cambodian “brides” from China, with some now in hiding having escaped the homes of men holding them against their will.

Over the past decade, tens of thousands of Southeast Asian women have been lured to China by criminal networks promising lucrative jobs, only to be sold as brides – some to abusive men – as China grapples with a gender imbalance.

Charities in Vietnam and Cambodia said some women who fled this year have been detained and shut off from communication, while others who are “not under immediate threat of being killed” have been advised to sit tight.

“Some say the husband is mentally ill, they’re being beaten, maybe prostituted to the neighbours, their lives are in immediate danger at this point,” said Michael Brosowski, head of Hanoi-based Blue Dragon Children’s Foundation.

Blue Dragon rescued one women every three days on average from China in 2019, but was forced to freeze operations in late January as coronavirus travel restrictions took hold.

“Getting to remote places, it’s just not possible now – and even if you could, the borders are closed,” Brosowski told the Thomson Reuters Foundation.

While Blue Dragon remains in touch with 27 women who have called for help in 2020, Phnom Penh-based anti-trafficking charity Chab Dai said it has lost contact with some who fled their abusers amid the coronavirus outbreak.

“According to Chinese law, survivors are often treated as illegal migrants,” Saron said. “We receive dozens of cases like this but there could be many more.”

A Chinese assistant to the Cambodian consul in Shanghai said little could be done to assist women who had escaped their captors and were now uncontactable.

“If we can get in touch with the women, we will find a way to help,” she said, giving her name only as Hayley. “But with no information, how could we find them?”

Authorities in Cambodia, Vietnam and China have in recent years tried to combat the trafficking of “brides” but campaigners fear a ban on marriage broker services has driven the trend further underground and put women at higher risk.

Criminal gangs scour poor regions for young women and pitch a dream life in China, where there is a surplus of some 40 million men – a legacy of Beijing’s one-child policy.

Targets are coaxed by the promise of a life of relative luxury in China, and while some do marry happily and send money home to their families, others end are facing sexual abuse, violence and exploitation.

(Reporting by Matt Blomberg, Editing by Belinda Goldsmith. Please credit the Thomson Reuters Foundation, the charitable arm of Thomson Reuters, that covers the lives of people around the world who struggle to live freely or fairly. Visit http://news.trust.org)