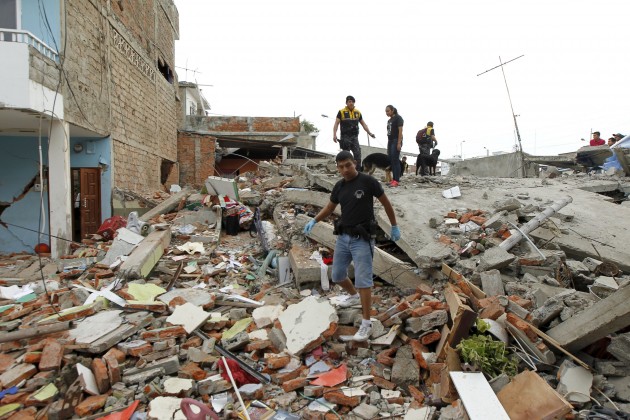 Red Cross members, military and police officers work at a collapsed area after an earthquake struck off the Pacific coast, at Tarqui neighborhood in Manta, Ecuador April 17, 2016. REUTERS/Guillermo Granja

PEDERNALES, Ecuador (Reuters) – During a terrifying five hours trapped in the rubble of her own restaurant, Filerma Rayo almost lost hope.

“I was yelling and yelling and then, at the end, I started to think I would die there,” said Rayo, 33, as she nursed a crushed foot, pinned by a falling piece of cement when a 7.8 magnitude earthquake shook Ecuador on Saturday.

The Andean nation’s worst quake in a decade killed more than 270 people, injured another 2,000, flattened buildings and tore apart roads along the Pacific coast.

“It was my siblings who saved us, the rescue teams hadn’t arrived yet,” said Rayo, who runs a restaurant on the bottom floor of a now-shattered hotel in the worst-hit town of Pedernales, a rustic beach location on the Pacific coast.

Her three brothers and sisters, also from Pedernales, came looking for Rayo and her husband, who suffered head injuries, after the quake. Guided by her shouts, they managed to remove the rubble and pull her out around midnight, well before emergency crews arrived.

Nearly 100 neighbours in Pedernales were not so lucky.

They died when the earthquake struck, sending pastel top floors crashing to the ground, punching holes in the façade of the church on the main square and obliterating a local hotel, its roof jack-knifed and crumbling.

Many residents, including Rayo and her family, spent a restless Sunday night sleeping outside on mattresses in the muggy tropical night, wary of aftershocks.

Others, too uneasy to sleep, watched from the sidelines as firefighters continued rescue operations in some buildings, calling for silence so they could listen for cries for help.

More than 600 people were treated for injuries at tents in the town’s still-intact football stadium, or were transported by ambulance or helicopter to regional hospitals.

Most of the corpses recovered were taken to the stadium and laid out under tents. Only four of 91 had not been identified by families. Wakes and burials were being quickly arranged.

Queues for supplies like bottled water, blankets and food snaked along the stadium walls, as government and Red Cross workers rushed with aid supplies to the lush, hilly zone next to Pacific beaches.

Residents complained that a lack of electricity was keeping them from using mobile phones to contact loved ones.

Many lost all their possessions.

“There’s nothing left of the houses and nowhere safe to stay,” said housewife Betty Reyna, 44, who was keeping watch over a dozen members of her family as they slept under a gas station awning early on Monday.

Reyna, her daughter and son had travelled from the capital Quito in search of relatives when they heard about the destruction in her hometown.

They were able to find some family members but Reyna had still not seen her parents or other daughter, though she had made contact with them and knew they were largely unharmed. Her father, however, had suffered head injuries.

“We’re taking everyone back to Quito as soon as we can, at least until things calm down here.”

More than 1,000 policemen, brought in to guarantee calm, patrolled Pedernales’ streets ahead of an expected visit by President Rafael Correa.

Rayo hopes she and her neighbours will get the support they need to rebuild their homes and businesses in the long term, but her immediate request is simple.

“We need everything,” she said. “I couldn’t even get pain medication at the medical tent.”