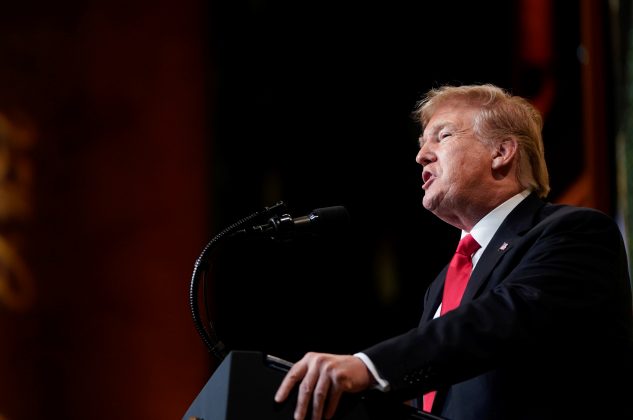 WASHINGTON (Reuters) – President Donald Trump again threatened on Wednesday to close the U.S. border with Mexico, this time calling on Congress to take steps immediately to deal with immigration and security loopholes that he says are creating a national emergency.

“Congress must get together and immediately eliminate the loopholes at the Border!” Trump wrote in a Twitter post. “If no action, Border, or large sections of Border, will close. This is a National Emergency!”

The threat drew an outcry from business leaders and others, who said the move could disrupt legal crossings and billions of dollars in trade. The U.S. Chamber of Commerce, the largest U.S. business lobbying group, said it contacted the White House to discuss the negative impact of a border closure.

Trump took a step back on Tuesday, saying action by Mexico in recent days had eased pressure on U.S. ports of entry. But he revived the closure warning on Wednesday in a bid to pressure Congress to act.

White House adviser Mercedes Schlapp said on Wednesday that progress is being made with Mexico on immigration issues but she declined to comment on whether the border would be closed this week.

“Our resources are being stretched thin. The system is overwhelmed,” she told reporters at the White House. “We are seeing our border patrol commissioner make it very clear that we are at a breaking point.”

Trump has made fighting illegal immigration from Mexico a key part of his agenda but shutting down one of the world’s most used borders might be a step too far even for many of his fellow Republicans.

Senate Republican leader Mitch McConnell said on Tuesday that closing the border could have devastating economic consequences, and joined his Democratic colleagues in warning Trump against such a move.

The White House is looking closely at ways to lessen the economic impact of a border shutdown, Trump economic adviser Larry Kudlow said on Wednesday.