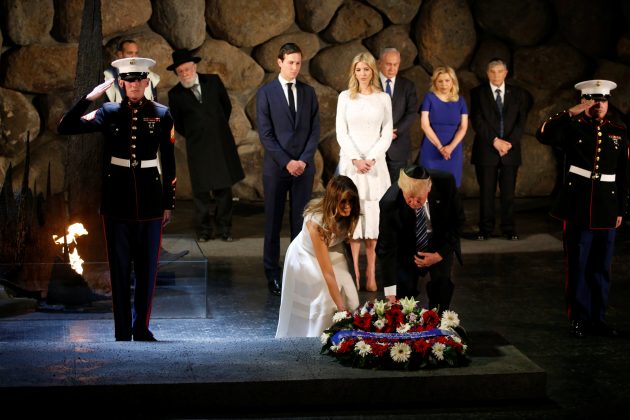 U.S. President Donald Trump and first lady Melania lay a wreath during a ceremony commemorating the six million Jews killed by the Nazis in the Holocaust, in the Hall of Remembrance at Yad Vashem Holocaust memorial in Jerusalem May 23, 2017. REUTERS/Jonathan Ernst

Holding hands, the president and First Lady Melania Trump walked solemnly to lay a wreath together upon the ashes of Holocaust victims, buried at the site’s Hall of Remembrance.

“Words can never describe the bottomless depths of that evil, or the scope of the anguish and destruction. It was history’s darkest hour,” Trump said in a short speech after the memorial ceremony.

“It was the most savage crime against God and his children,” said Trump, who is visiting Israel and the Palestinian Territories on the second leg of his first foreign trip since taking office in January.

Trump’s administration has drawn anger over past omissions and utterances regarding the Holocaust.

In January, on International Holocaust Remembrance Day, a Trump administration statement failed to mention Jews, the overwhelming majority of those who were killed in the Holocaust.

In April, White House spokesman Sean Spicer triggered an uproar when he said Hitler did not sink to the level of Syrian President Bashar al-Assad by using chemical weapons on his own people. Spicer also used the term “Holocaust centers”, in an apparent reference to the Nazi death camps.

Spicer later apologized after his comments sparked an uproar on social media and elsewhere for overlooking the fact that millions of Jews perished in Nazi gas chambers.

The Anti-Defamation League said in April that anti-Semitic incidents, from bomb threats and cemetery desecrations to assaults and bullying, have surged in the United States since the election of Trump, and a “heightened political atmosphere” played a role in the rise.

Trump had been criticized for waiting until late February to deliver his first public condemnation of anti-Semitic incidents, previously speaking more generally about his hope of making the nation less “divided.”

He later called such incidents “horrible … and a very sad reminder” of the work needed to root out hate, prejudice and evil.

Trump was due to travel to Rome later on Tuesday, where he will continue a nine-day trip that began in Saudi Arabia.