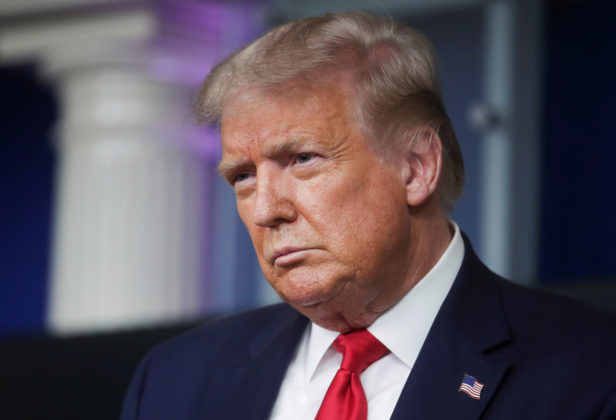 U.S. President Donald Trump listens to a question from a reporter during a coronavirus disease (COVID-19) pandemic briefing in the Brady Press Briefing Room of the White House in Washington, U.S., August 3, 2020. REUTERS/Jonathan Ernst

(Reuters) – U.S. President Donald Trump’s campaign on Sunday dropped a major part of a lawsuit it brought seeking to halt Pennsylvania from certifying its results in the presidential election, narrowing the case to a small number of ballots.

In an amended complaint filed in federal court, the Trump campaign dropped a claim that election officials unlawfully blocked observers from watching the counting of mail-in ballots in Philadelphia and Pittsburgh.

The pared-down lawsuit now focuses on a claim that Democratic-leaning counties unlawfully allowed voters to fix errors in their mail-in ballots in violation of state law. Officials have said the dispute affects a small number of ballots in the state, where Democrat Joe Biden is projected to win by more than 60,000 votes.

Pennsylvania officials have asked a judge to toss Trump’s lawsuit, saying the election observers were allowed to assess the processing of mail-in ballots and that all of the state’s counties were permitted to inform residents if their mailed-in ballots were deficient, even if it was not mandatory for them to do so.

In Pennsylvania’s populous Montgomery County, less than 100 voters fixed ballots with technical errors, a county official testified at a court hearing on Nov. 4.

The Trump campaign continues to seek a court order blocking the Pennsylvania secretary of state from ratifying the result.

Biden clinched the election after news media and Edison Research called him as the victor in Pennsylvania, putting him over the 270 electoral votes needed to win. Edison Research said on Friday that Biden had won 306 Electoral College votes to Trump’s 232.

Trump on Sunday briefly appeared to acknowledge that Biden’s victory, but then recanted and claimed he would soon file fresh challenges. His campaign has filed a string of long-shot lawsuits in several battleground states.

On Twitter on Sunday, Trump said many cases being filed were not from his campaign.

“Our big cases showing the unconstitutionality of the 2020 Election, & the outrage of things that were done to change the outcome, will soon be filed!,” he tweeted.

Legal experts say the lawsuits have little chance of changing the outcome of the election. A senior Biden legal adviser has dismissed the litigation as “theatrics, not really lawsuits.”

Pennsylvania is due to certify the election results on Nov. 23.