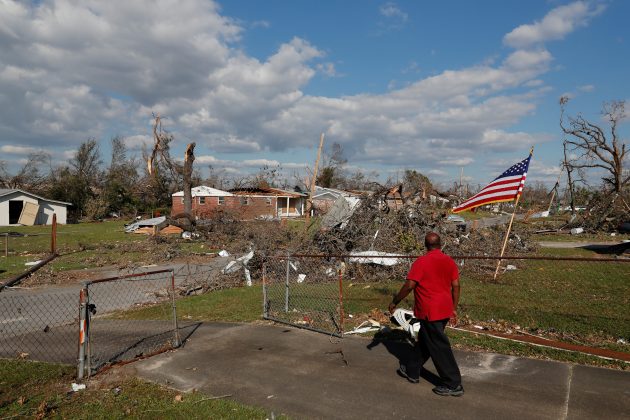 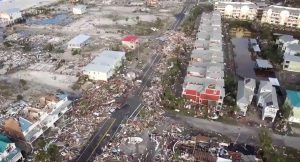 The president and first lady were to arrive at Eglin Air Force Base in the Panhandle, Florida’s northwestern region, and were scheduled to return to the White House on Monday evening, the White House said. Trump last month visited North and South Carolina after they were hit by Hurricane Florence.

Trump was expected to hold a briefing with Florida Governor Rick Scott, a fellow Republican, at the base located about 100 miles (160 km) west of where Hurricane Michael came ashore on Wednesday as one of the most powerful storms on record to make landfall in the continental United States.

Insured losses for wind and storm surge from Hurricane Michael will run between an estimated $6 billion and $10 billion, risk modeler AIR Worldwide said. Those figures do not include losses paid out by the National Flood Insurance Program, AIR Worldwide said.

Michael hit the Florida Panhandle with 155 mph (250 kph) winds as a Category 4 hurricane on the five-step Saffir-Simpson scale. 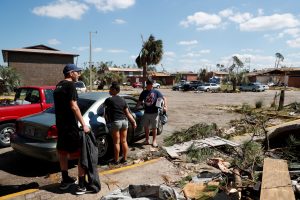 Michael Bailey (L) evacuates his home with his children, Azelia and Seth, in the aftermath of Hurricane Michael in Lynn Haven, Florida, U.S., October 14, 2018. REUTERS/Terray Sylvester

At least 18 people in four states have died because of the storm. Dozens of people remained missing on Sunday in Florida Panhandle communities left in ruins.

Rescuers said they expected the death toll to rise and they were using cadaver dogs and heavy equipment to search collapsed homes in small towns such as Mexico Beach and Panama City for more victims.

Rescue efforts have been hampered by blocked roads and huge piles of rubble in many communities such as Mexico Beach, which took a direct hit from the massive storm that killed at least one person there.

“If we lose only one life, to me that’s going to be a miracle,” Mexico Beach Mayor Al Cathey told Florida media.

Cathey told ABC News that 46 people out of the town of some 1,000 residents remained missing or unaccounted for on Sunday. 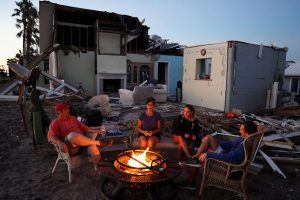 A family sits by a fire and prepares to eat a dinner of MREs in front of their house with no roof following Hurricane Michael in Mexico Beach, October 13.
REUTERS/Carlo Allegri

Survivors grappled with power outages and shortages of food and water amid the mazes of uprooted trees and debris. Electricity and telephone service were being slowly restored but it could be weeks before power returns to the state’s most damaged areas.

Trump is fully committed to helping state and local agencies with the recovery, the White House said. It was announced late on Sunday that he declared a state of emergency in Georgia, freeing up federal resources for the state. A similar declaration had already been made for Florida.