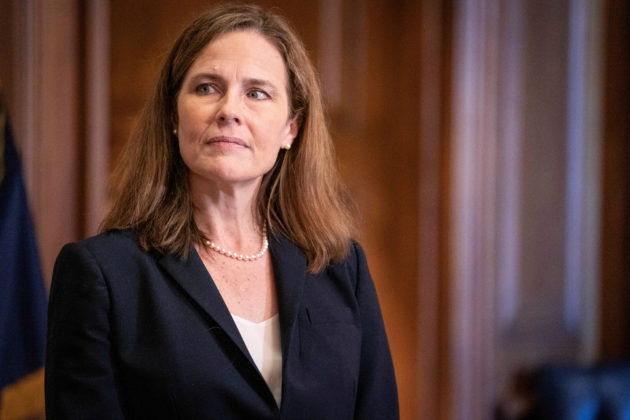 WASHINGTON (Reuters) – The White House on Monday planned a celebration to celebrate the Republican Senate’s expected confirmation of President Donald Trump’s conservative nominee Amy Coney Barrett to the Supreme Court, one a month after a similar event was linked to a COVID-19 outbreak that infected the president, among others.

While Democrats have fiercely opposed Barrett’s nomination, Republicans hold a 53-47 Senate majority and her confirmation to a lifetime post on the court seems assured. Trump pressed the Senate to confirm Barrett before the Nov. 3 election, which would create a 6-3 conservative majority on the top U.S. judicial body.

Barrett, a federal appeals court judge, is Trump’s third selection for the court, enabling him to remake it in a dramatic fashion as part of his success in moving the broader federal judiciary to the right since taking office in 2017.

“Tonight, we’ll be doing the best we can to encourage as much social distancing as possible,” Meadows said.

No nominee to the Supreme Court has ever been confirmed by the Senate this close to a presidential election. Her confirmation would give Trump – who has been touting his appointment of Barrett at campaign rallies to the cheers of his supporters – a major political victory eight days before the election.

The rush to confirm Barrett, 48, has bitterly divided Democrats and Republicans, who are expected to split largely along party lines on the final vote. Trump has said he expects the court to decide the election’s outcome and wants Barrett on the bench to participate on any election-related cases that go before the justices.

Senate Democrats and some Republicans expressed unease at the possibility that Vice President Mike Pence, several of whose close aides have tested positive for the novel coronavirus, might attend Monday’s vote.

Senate Democratic Leader Chuck Schumer said Pence “reportedly intends to come” to the Senate chamber to preside over the final vote, and blasted the vice president for being willing to put “the health of everyone who works in this building at risk.”

Meadows said he was not sure about Pence’s plans. White House senior aide and Trump’s son-in-law Jared Kushner told Fox News that Pence “knows the right protocols to follow, and I have every confidence that he’s following those protocols.”

The Centers for Disease Control and Prevention recommends people quarantine for 14 days if they have been in close contact with someone who tests positive for COVID-19.

Barrett, if confirmed, is expected to participate in arguments on Nov. 10 in a case in which Trump and Republican-led states are seeking to invalidate the Affordable Care Act. The 2010 healthcare law, also known as Obamacare, has helped millions of Americans obtain medical insurance and barred private insurers from denying medical coverage to people with pre-existing conditions.

Barrett has criticized previous rulings upholding Obamacare but said during her confirmation hearing she had no agenda to invalidate the measure.

During her confirmation hearing before the Senate Judiciary Committee two weeks ago, Barrett, a favorite of Christian conservatives, sidestepped questions on abortion, presidential powers, climate change, voting rights, Obamacare and other issues.

“It is my belief that Judge Barrett represents a threat to the very rights – including reproductive rights, rights of LGBT individuals, and voting rights – that Justice Ginsburg worked so hard to protect,” Senate Judiciary Committee senior Democrat Dianne Feinstein said on the Senate Floor on Sunday.

“For those reasons, I oppose her nomination.”

Barrett has been a federal appeals court judge since 2017 and was previously a legal scholar at the University of Notre Dame in Indiana.

(Reporting by Sarah N. Lynch and Steve Holland; additional reporting by Susan Heavey; Editing by Peter Cooney and Will Dunham)