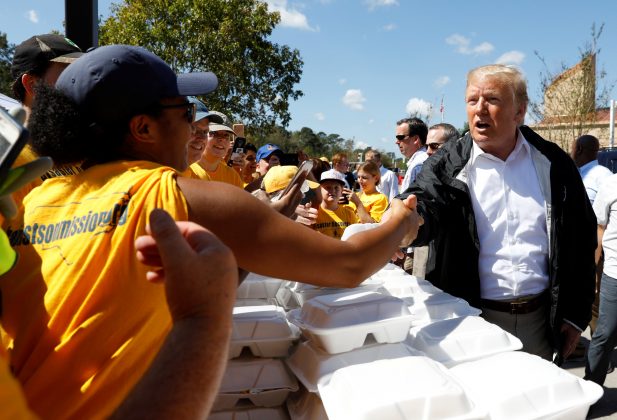 By Jeff Mason and Ernest Scheyder

HAVELOCK/WILMINGTON, N.C. (Reuters) – U.S. President Donald Trump on Wednesday promised that North and South Carolina would have strong federal support as they recovered from the devastation of Hurricane Florence, whose floodwaters continue to threaten the region.

“We’re going to be there 100 percent,” Trump told officials at a briefing shortly after arriving at the Marine Corps Air Station Cherry Point in Havelock, North Carolina. “… There will be nothing left undone. You’ll have everything you need.”

Trump, who has been criticized for his handling of Hurricane Maria in Puerto Rico last year, also thanked first responders for their work since Florence made landfall on Friday and recapped the efforts to get food to residents and restore power. 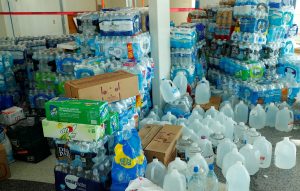 Supplies including bottled water are seen waiting to be loading into airplanes and be delivered to areas hit by Hurricane Florence, now downgraded to a tropical depression, at the Raleigh Durham Airport in Raleigh, North Carolina, U.S., September 19, 2018. REUTERS/Chris Keane

More than 15,000 people remain in shelters and more than 200,000 customers are without power across North Carolina because of Florence, which came ashore as a Category 1 hurricane, according to state officials.

Although the storm is long gone, river flooding still poses a danger to the area. The Cape Fear River was expected to crest at 61.5 feet (19 meters), four times its normal height, on Wednesday in Fayetteville, a city of 200,000 near the Fort Bragg army base in the southern part of the state, according to the National Weather Service. That has disrupted efforts to restore power, clear roads and allow evacuated residents to go home.

“There is a strong potential that those who live within the 1-mile evacuation area of the Cape Fear River will be impacted by flooding,” the city said in a statement.

Florence has killed at least 36 people, including 27 in North Carolina, eight in South Carolina and one in Virginia. Two of the South Carolina victims were mental health patients who drowned on Tuesday when a van carrying them was swept away by floodwater. 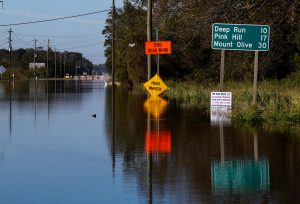 A road is blocked by flood waters in the aftermath of Hurricane Florence, now downgraded to a tropical depression, in Kinston, North Carolina, U.S., September 19, 2018. REUTERS/Eduardo Munoz

Thousands of rescues have taken place in the Carolinas. Fire and rescue crews were waiting to go into many areas to assist with structural damage resulting from Florence, which has dumped up to 36 inches (91 cm) of rain in parts of North Carolina since Thursday.

At least 16 rivers remained at a major flood stage, with three others set to crest in the coming days in North Carolina, the state said.

In the town of Fair Bluff, North Carolina, which has struggled to recover from the devastation of Hurricane Matthew in 2016, only about 50 residents remained on Tuesday, Fair Bluff Police Chief Chris Chafin told Reuters.

The town has largely been cut off by flooding from the still-rising Lumber River, which was expected to crest on Wednesday.

As Florence was bearing down on the Carolinas last week, Trump reignited the controversy over his handling of Maria by disputing the official death toll of 2,975 in the U.S. territory, which was compiled by public health experts at George Washington University. Trump said, without offering evidence, that Democrats had inflated the figure to make him look bad.

Maria also devastated the infrastructure of Puerto Rico, whose 3 million citizens are Americans but do not vote in presidential elections, and left much of the island without power for months. Critics said the Trump administration was slow to recognize the extent of the damage and slow to help.

Former basketball star Michael Jordan, a native of Wilmington, North Carolina, and the principal owner of the Charlotte Hornets of the National Basketball Association, donated $2 million to the Florence recovery effort, the team said.