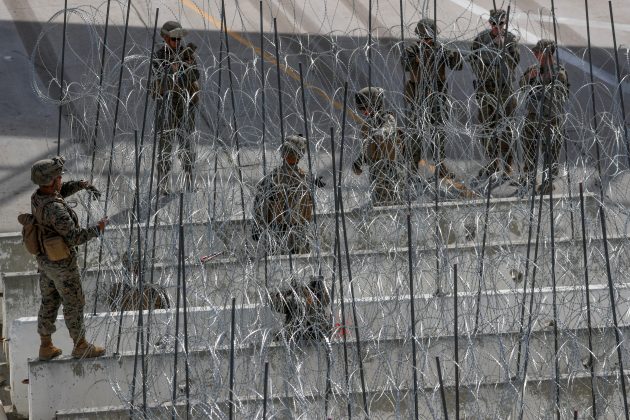 FILE PHOTO: U.S. Marines help to build a concertina wire barricade at the U.S. Mexico border in preparation for the arrival of a caravan of migrants at the San Ysidro border crossing in San Diego, California, U.S., November 13, 2018. REUTERS/Mike Blake/File Photo

WASHINGTON (Reuters) – U.S. President Donald Trump on Wednesday called on Mexico to do more to block a new caravan of migrants and asylum-seekers traveling through the country toward the United States, reiterating his threat to close the border or send more troops.

“A very big Caravan of over 20,000 people started up through Mexico,” Trump wrote on Twitter. “It has been reduced in size by Mexico but is still coming. Mexico must apprehend the remainder or we will be forced to close that section of the Border & call up the Military.”

He said the incident probably was “a diversionary tactic for drug smugglers” and armed troops were being sent to the border.

Mexican officials could not be immediately reached for comment on Trump’s statement.

Trump has made cracking down on immigration a priority that fueled his 2016 presidential campaign and election victory. More than 100,000 people were apprehended or presented themselves to U.S. authorities in March, according to the White House, which said it was the highest number in a decade.

In response to what Trump has described as a crisis, his administration has sent thousands of active-duty and National Guard troops to the border and moved border agents to handle an influx of migrants. Last month, Trump threatened to close the U.S.-Mexico border if the Mexican government did not immediately stem illegal migration.

When Congress declined to designate money to build a border wall, Trump declared a national emergency earlier this year over the issue in a bid to redirect funding for the project, thrusting the immigration issue to the forefront of the 2020 presidential race.

The head of Mexico’s National Migration Institute, Tonatiuh Guillen, on Tuesday pointed to an increase in deportations from the country, saying Mexico had returned 15,000 migrants in the past 30 days.

He did not specify where the people were deported to, but the majority of people traveling through Mexico to the United States are from Guatemala, Honduras and El Salvador, where migrants say they are fleeing corruption, gang violence and entrenched poverty.