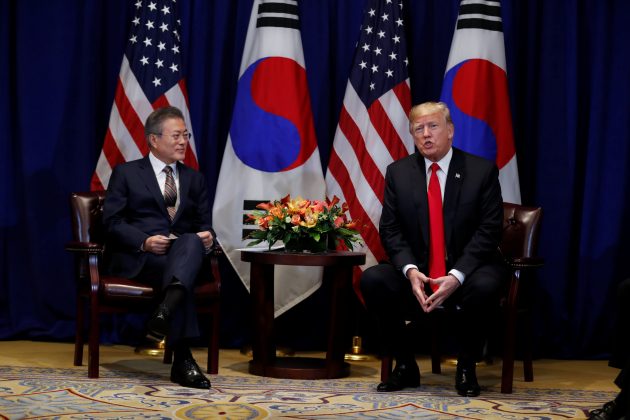 By Jeff Mason and David Brunnstrom

UNITED NATIONS (Reuters) – U.S. President Donald Trump said on Monday he expected a second summit with North Korean leader Kim Jong Un to be announced “pretty soon” but that the location had yet to be determined.

Trump, during a meeting with South Korean President Moon Jae-in at the United Nations, said: “Chairman Kim has been really very open and terrific, frankly. I think he wants to see something happen.”

Moon met with Kim for a third time last week. He said brought Trump a personal message from the North Korean leader saying he was hoping to meet with the U.S. president again soon.

Trump and Kim met for an unprecedented summit on June 12, and Trump has been keen on a second meeting, even though some U.S. officials and most analysts say Pyongyang has yet to show it is prepared to give up a nuclear arsenal that threatens the United States.

U.S. Secretary of State Mike Pompeo told a news briefing earlier on Monday he hoped to travel back to North Korea before the end of the year to make final preparations for a second summit, which he said he was “confident” would happen.

“I expect I’ll be traveling to Pyongyang before too long,” he said.

Pompeo said he was optimistic that Kim would deliver on his pledge to denuclearize, but this would take time.

“We’re bringing the two senior leaders, the individuals who can actually make the decisions that will move this process forward, bring them together so we can continue to make progress towards what the U.N. Security Council has demanded and what Chairman Kim has promised he would do.

“That’s the effort. There remains work to be done. There will be some time before we get to complete denuclearization for sure.”

At last week’s meeting with Moon, Kim promised to dismantle a missile site and also a nuclear complex – if the United States took “corresponding action.”

However, while appearing to set a positive tone, the commitments fell far short of Washington’s demands for a complete inventory of North Korea’s weapons programs and irreversible steps toward denuclearization.

The mood though is sharply changed from that at last year’s U.N. General Assembly, when Trump threatened to “totally destroy” North Korea and mocked the North Korean leader as “Rocket Man” on a “suicide mission.”

North Korea’s representative to the meeting, Foreign Minister Ri Yong Ho, responded to Trump’s U.N. remarks last year by calling them “the sound of a dog barking” and warning that North Korea could detonate a hydrogen bomb over the Pacific.

Pompeo has proposed a meeting with Ri at the General Assembly this week. U.S. ambassador to the United Nations Nikki Haley said last week the two had agreed to meet but said the meeting could take place later.