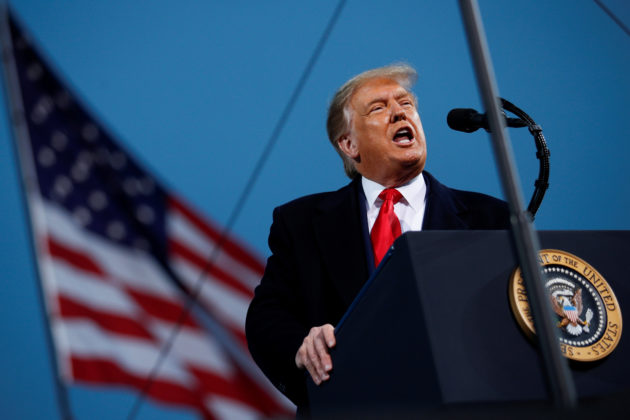 WASHINGTON (Reuters) – President Donald Trump said on Monday he will announce his U.S. Supreme Court pick by the end of the week, moving quickly to fill the seat of liberal icon Ruth Bader Ginsburg and cement a 6-3 conservative majority ahead of his Nov. 3 re-election bid.

The Republican president said he is looking “very seriously” at five candidates and would put forward his nominee on Friday or Saturday after funeral services for Ginsburg, who died of complications from pancreatic cancer on Friday at age 87.

Trump said the Republican-controlled Senate should hold a vote ahead of the election.

“The final vote should be taken frankly before the election. We have plenty of time for that,” Trump said on Fox News.

Senate Majority Leader Mitch McConnell, who has prioritized confirming Trump’s judicial appointments, has said he would usher through a vote. Republicans hold a 53-47 majority in the Senate, but two Republican senators – Maine’s Susan Collins and Alaska’s Lisa Murkowski – over the weekend said the chamber should not move forward with a Trump nominee before the election.

McConnell has time, as a new Congress will not be sworn in until Jan. 3. Democrats are hoping to win control of the Senate in the election.

Ginsburg’s death has upended the campaign season, giving Trump and his party an opportunity to strengthen its grip on a court whose decisions influence many spheres of American life including abortion, healthcare, gun rights, voting access, presidential powers and the death penalty.

Asked about Lagoa, a conservative Cuban-American jurist from Florida, Trump said, “She’s Hispanic. She’s a terrific woman from everything I know. I don’t know her. Florida. We love Florida.” Florida is an election battleground state pivotal to Trump’s chances against Biden.

The court vacancy also has given Trump and his fellow Republicans a chance to steer the national discussion away from the coronavirus pandemic, which has killed almost 200,000 Americans and thrown millions of people out of work.

Democrats accused McConnell of hypocrisy for being eager to usher a Trump nominee to a confirmation vote. In 2016, he refused to even consider Democratic President Barack Obama’s nominee to fill a vacancy on the court left by the death of conservative Justice Antonin Scalia, saying it would be inappropriate to do so during an election year.

(Reporting by Lawrence Hurley in Washington and Andrew Chung in New York; Additional reporting by Doina Chiacu, Susan Heavey and Jan Wolfe, Writing by Andy Sullivan; Editing by Will Dunham and Scott Malone)