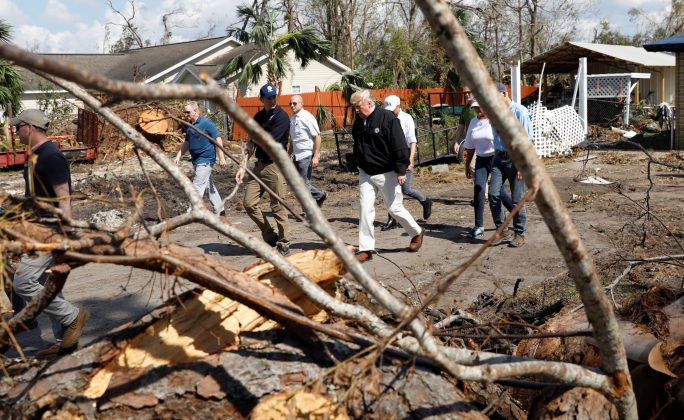 U.S. President Donald Trump visits a street in the the town of Lynn Haven, Florida, as he tours areas ravaged by Hurricane Michael in Florida and Georgia, U.S., October 15, 2018. REUTERS/Kevin Lamarque

LYNN HAVEN, Fla. (Reuters) – President Donald Trump got a first-hand look on Monday at the “total devastation” that Hurricane Michael brought to Florida, as rescuers searched for scores of missing and hundreds of thousands of residents remained without electricity. 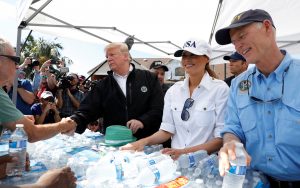 Trump and first lady Melania Trump passed out bottles of water at an aid center in Lynn Haven, a city of about 18,500 people near Panama City in northwestern Florida, after taking a helicopter flight from Eglin Air Force Base about 100 miles (160 km) to the west.

“To see this personally is very tough – total devastation,” said Trump, who later traveled to neighboring Georgia to see storm damage there.

At least 18 deaths in four states have been blamed on Michael, which crashed into the Panhandle last Wednesday as one of the most powerful storms on record to hit the continental United States.

Thousands of rescuers, including volunteers, are still combing remote areas of the Florida Panhandle for those reported missing. They include 46 in Mexico Beach, according to ABC News. The town took a direct hit from the hurricane, and at least one person died there.

With most Mexico Beach homes already searched for survivors, rescue workers began using cadaver dogs to try to recover any human remains that might be buried under debris.

“The next phase is recovery,” Ignatius Carroll, a Miami fire captain who leads a Federal Emergency Management Agency rescue team, said by phone as he combed through wreckage. “We start using the dogs for larger rubble piles that were created by the storm.”

Searchers went through debris by hand, rather than with machines, so as not to destroy any bodies, Mexico Beach Councillor Linda Albrecht said.

“We expect to find everybody, because that’s our mentality. We expect everything to work out, but who knows what’s down the road?” said Albrecht, who returned to her home on Sunday to find it destroyed.

About 200,000 people remained without power in the U.S. Southeast, with residents cooking with fires and barbecue grills during daylight in hard-hit coastal towns such as Port St. Joe, Florida.

Insured losses for wind and storm surge from Hurricane Michael will run between an estimated $6 billion and $10 billion, risk modeler AIR Worldwide said. Those figures do not include losses paid out by the National Flood Insurance Program or uninsured property, AIR Worldwide said.

With top sustained winds of 155 miles per hour (250 kph), Michael hit the Florida Panhandle as a Category 4 hurricane on the five-step Saffir-Simpson scale.

Rescue efforts have been hampered by roads choked with downed trees after coastal woodlands and forests were uprooted by the storm.

Water service was restored to some in Panama City on Monday but Bay County officials said it was not yet safe to drink. Homeowners were advised to keep toilet flushes to a minimum because the sewer system was operating only at half capacity. 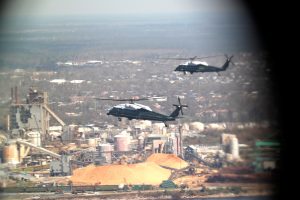 The Florida Division of Emergency Management said that while power was returning in most areas, at least 85 percent of customers in four mainly rural Panhandle counties were without electricity on Monday. Officials said it could be weeks before power returns to the most-damaged areas.