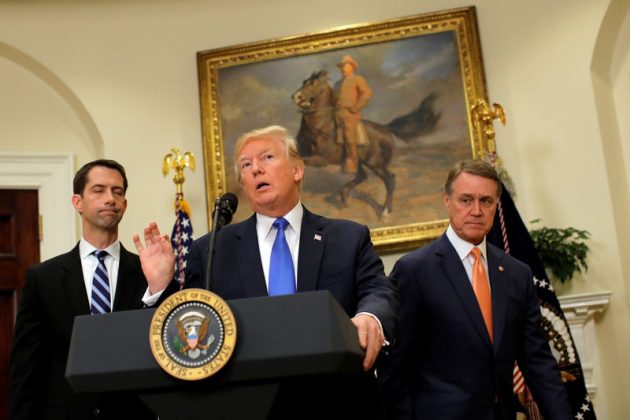 By Ayesha Rascoe and Mica Rosenberg

WASHINGTON/NEW YORK (Reuters) – After a crackdown on illegal immigration that has sharply reduced the number of unauthorized border crossings from Mexico, U.S. President Donald Trump is now turning his attention to reducing the number of legal immigrants in the country.

The White House is throwing its support behind a bill developed by Republican senators Tom Cotton of Arkansas and David Perdue of Georgia that would cut legal immigration by 50 percent over 10 years by reducing the kinds of relatives immigrants can bring into the country.

But the legislation faces an uphill climb to get through Congress where some senior Republicans back comprehensive immigration reform, not a tough crackdown.

Under the new bill, known as the RAISE Act, the United States would prioritize high-skilled immigrants by setting up a merits-based system similar to those used by Canada and Australia.

Trump and the Republican lawmakers blasted the current immigration system as out of date and argued that it hurts American workers by driving down wages.

“This competitive application process will favor applicants who can speak English, financially support themselves and their families and demonstrate skills that will contribute to our economy,” Trump said.

The Senators said they worked closely with the White House on this latest version of their bill. “This is probably our third or fourth visit to the Oval Office to work with President Trump,” Cotton told reporters.

Slashing legal immigration has long been pushed by low-immigration advocacy groups in Washington like NumbersUSA and the ideas have been backed by now-Attorney General Jeff Sessions, who is now facing public criticism from Trump.

NumbersUSA President Roy Beck hailed the bill and said that it “will do more than any other action to fulfill President Trump’s promises as a candidate.” Trump vowed to crack down on illegal immigration during his campaign and signed two executive orders soon after taking office to increase border security and interior enforcement.

Cotton and Perdue said their bill does not affect temporary visas for workers in certain tech sectors and seasonal jobs that are popular with many businesses. They stressed that the legislation was narrowly focused, an approach they hoped would be able to get bipartisan support.

“We’re not trying to boil the ocean here and change everything about our immigration law,” Cotton said.

But other Republican lawmakers said the bill might be going too far. Senator Lindsey Graham, from South Carolina, said his state is dependent on immigrant labor to sustain the two biggest sectors of the economy, agriculture and tourism.

Economists have called into the question the benefits of cutting legal immigration. FWD.us, a group that represents the tech industry said that the bill would “severely harm the economy.”

The bill aims to end the diversity visa lottery, which allows 50,000 people from underrepresented countries to obtain green cards.

It also sets a 50,000 annual cap on refugees, instead of a level mandated by the president.

Trump suggested at an event in New York’s Long Island on Friday, where he spoke out against violence committed by Central American gang members, that immigrants today are different than in previous generations.