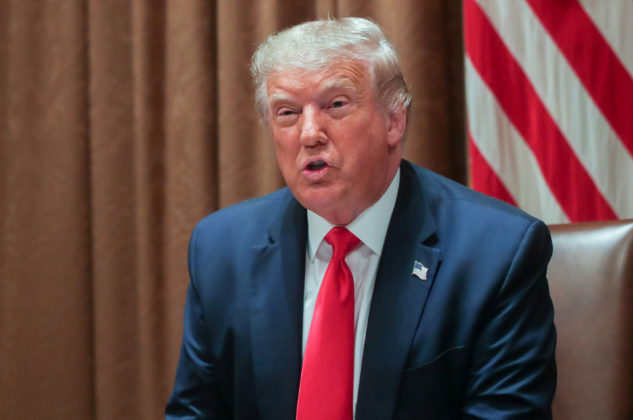 U.S. President Donald Trump speaks during an executive order signing event on "hiring American" in a darkened Cabinet Room of the White House, with curtains drawn and the lights low, in Washington, U.S., August 3, 2020. REUTERS/Jonathan Ernst

WASHINGTON (Reuters) – President Donald Trump said on Monday he was formally removing two members from the board of the Tennessee Valley Authority for seeking to outsource U.S. jobs to foreign workers, and criticized its chief executive as overpaid.

In remarks during a White House event, Trump threatened to remove the agency’s chief executive, Jeff Lyash, and called on the board of the nation’s largest public utility to do so. Trump has previously been critical of the agency and threatened firm disciplinary action against it.

“Let this serve as a warning to any federally appointed board. If you betray American workers, then you will hear two simple words ‘you’re fired,'” Trump said, before signing an executive order aimed at preventing federal agencies from using foreign workers and offshore labor to displace U.S. workers.

Trump said he was removing TVA board chairman James Thompson and Richard Howorth from their positions on the board.

U.S. Tech workers, a nonprofit formed to fight the growth of H1-B visas to foreign workers, had criticized TVA in a series of television ads. The group urged Trump, who has the authority to appoint the TVA board, to fire Lyash for laying off U.S. workers and replacing them with contractors hiring foreign workers.

The Chattanooga Free Press reported in June that TVA had laid off 62 IT workers in Chattanooga and Knoxville as it moved to outsource more data and programming work.

A spokesman for the TVA had no immediate comment.

During the meeting, attended by several TVA workers, Trump said he had been informed that Lyash had contacted the White House and indicated a strong willingness to reverse course.

Trump has sparred with the TVA in the past over its efforts to close coal-fired power plants. He has also previously proposed selling parts of the government-owned entity to the private sector.

Trump said the position was overpaid, and the CEO should not make more than $500,000 annually. “He gets $8 million a year,” said of Lyash’s package. “That was just a succession of deep swamp things happening and it’s a disgrace.”