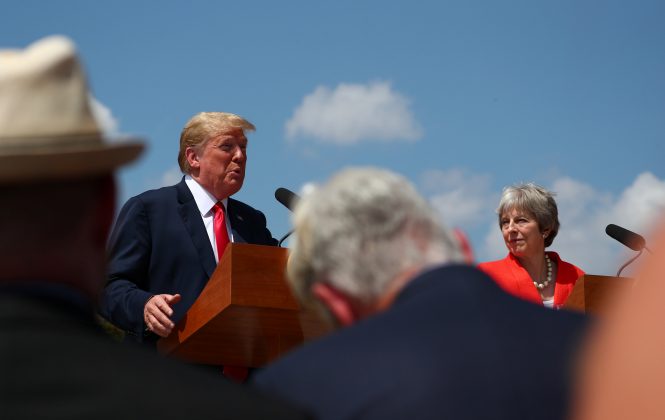 “If we can do something to substantially reduce them, I mean, ideally get rid of them, maybe that’s a dream, but certainly it’s a subject that I’ll be bringing up with him,” Trump said of his upcoming meeting with Putin.

The United States and Russia are by far the world’s biggest nuclear powers.

Trump cautioned that it was hard to do substantive deals with Russia because his opponents would say that he was too pro-Russian.

“We have this stupidity going on, pure stupidity, but it makes it very hard to do something with Russia because, anything you do, it’s like: ‘Russia, oh he loves Russia’,” Trump said. “I love the United States but I love getting along with Russia and China and other countries.”

Though Trump has not so far given specific details about what nuclear arms control treaties they would like to talk about, he and Putin are likely to discuss the possibility of extending the “New Start” treaty – a pillar of arms control.

They are also likely to discuss what to do about another pact known as the Intermediate-Range Nuclear Forces Treaty (INF) to try to dampen a high-risk nuclear rivalry between the two former Cold War foes.

Ahead of the summit, Russian diplomats have stressed the need for strategic stability talks, saying existing arms control treaties are fraying at the edges and they fear Washington will withdraw from the INF treaty. Both sides accuse one another of violating the treaty.

New Start, signed in 2010, requires both nations to cut their deployed strategic nuclear warheads to no more than 1,550, the lowest level in decades.

The treaty, which also limits deployed land- and submarine-based missiles and nuclear-capable bombers, expires in February 2021, but can be extended by five years if both sides agree.

A U.S. official said Trump would be ready to talk about New Start if Putin raised it, but it was not a big U.S. priority.