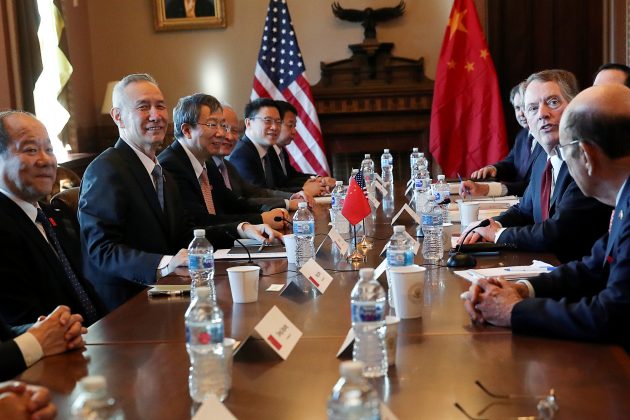 By Doina Chiacu and David Lawder

WASHINGTON (Reuters) – President Donald Trump expressed optimism about forging a comprehensive trade deal with China as high-level talks continued on Thursday, but said any arrangement that fails to open Chinese markets broadly to U.S. industry and agriculture would be unacceptable.

As delegations from the world’s two top economies held the second of two scheduled days of talks in the U.S. capital aimed at easing a six-month-old trade war, Trump also said no final accord will be made until he meets with Chinese President Xi Jinping in the near future.

The talks were aimed at resolving deep differences over China’s intellectual property practices. Trump has threatened to raise tariffs on $200 billion of Chinese goods to 25 percent from 10 percent on March 2 if an agreement is not reached and impose new tariffs on the rest of Chinese goods shipped to the United States.

Trump was scheduled to meet with the leader of the Chinese delegation, Vice Premier Liu He, at the White House at 3:30 p.m. as talks conclude.

“Meetings are going well with good intent and spirit on both sides,” Trump said on Twitter. “No final deal will be made until my friend President Xi, and I, meet in the near future to discuss and agree on some of the long-standing and more difficult points.”

Trump, who has engaged in a series of fights with a variety of trade partners since becoming president in 2017, has acted as the final decision-maker in U.S. trade negotiations. Trump has vetoed multiple proposed trade deals with China, choosing to push ahead with tariffs on Chinese goods to gain leverage.

The Republican president set a high bar for any agreement in the current round of talks, writing on Twitter, “China’s representatives and I are trying to do a complete deal leaving NOTHING unresolved on the table.”

Trump said he was looking for China to open its markets “not only to Financial Services, which they are now doing, but also to our Manufacturing, Farmers and other U.S. businesses and industries. Without this a deal would be unacceptable!”

Chinese negotiators proposed a meeting between Trump and Xi next month in the Chinese city of Hainan, the Wall Street Journal reported.

Two White House officials said the Chinese had not made an invitation in the current talks for Trump to meet Xi in China soon, but added that they would not be surprised if such an offer was extended during Liu’s meeting on Thursday.

“The White House thus far has been focused on substance, not next steps,” one official told Reuters, speaking on condition of anonymity.

People’s Bank of China Governor Yi Gang declined comment on Chinese proposals as he left the delegation’s hotel for the meetings in Eisenhower Executive Office Building, next to the White House. Asked how the talks were going, Yi flashed a thumbs-up sign.

U.S. officials have demanded that Beijing make deep structural changes to its industrial policies, including broad new protections for American intellectual property and an end to practices that Washington has said force U.S. companies to transfer technology to Chinese firms in exchange for market access.

The U.S. complaints, along with accusations of Chinese cyber theft of American trade secrets and a systematic campaign to acquire U.S. technology firms, were used by Trump’s administration to justify punitive tariffs on $250 billion worth of Chinese imports.

China has retaliated with tariffs of its own, but has suspended some and is allowing some purchases of U.S. soybeans during the talks.

Chinese officials have said their policies do not coerce technology transfers. They have emphasized steps already taken, including reduced automotive tariffs and a draft foreign investment law expected to be approved in March that improves access for foreign firms and promises to outlaw “administrative means to force the transfer of technology.”

A crucial component of any progress in the talks, according to U.S. officials, is agreement on a mechanism to verify and enforce China’s follow-through on any reform pledges. This could maintain the threat of U.S. tariffs on Chinese goods for the long term.

The U.S. tariffs on Chinese goods are just one front in Trump’s efforts to upend the global trading order with his “America First” strategy. He has also imposed global tariffs on imported steel and aluminum, washing machines and solar panels and has threatened to raise tariffs on imported cars unless Japan and the European Union offer trade concessions.