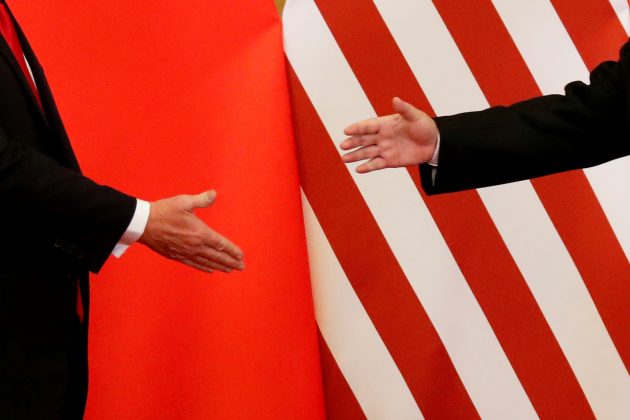 By Jonathan Spicer and Lewis Krauskopf

NEW YORK (Reuters) – One of the darkest clouds hanging over Wall Street somewhat dissipated on the weekend when China and the United States agreed to shelve any new tariffs and reset discussions, at least temporarily halting an increase in their tensions over trade.

Investors said the agreement, lasting 90 days, between Chinese President Xi Jinping and U.S. President Donald Trump at the G20 summit, spelled a reprieve for stocks and could pave the way for a positive bookend to a volatile trading year.

U.S. stock index futures jumped as trading for the week began late on Sunday, with benchmark S&P 500 e-mini futures up 1.55 percent. Treasury futures were soft, suggesting an appetite for risk-taking could extend last week’s gains in the stock market.

The trade tension between Washington and Beijing, along with an uncertain outlook for U.S. rate hikes, have for months dogged prospects for equities. The U.S. pledge not to boost tariffs on $200 billion of Chinese goods could mark the most important deal in years between the world’s top two economies.

“It sets a pretty positive tone (and) stocks should have a decent rally into December,” said Nathan Thooft, Boston-based global head of asset allocation for Manulife Asset Management.

Thooft said he believed the Trump administration was using a threat to raise tariffs to 25 percent on Jan. 1, from 10 percent now as a negotiating tactic. “So when you start to see evidence that there is the ability to come to some type of agreement, that has to be viewed as a positive,” he said.

The stock market logged an official correction after a selloff in October and continued volatility in November that, just over a week ago, had left the benchmark S&P 500  stock index down 10 percent from its all-time high.

Markets rebounded last week on comments perceived as dovish from Federal Reserve Chair Jerome Powell, though the S&amp;P was up only 2.4 percent in 2018.

The latest trade standoff began in September when the United States imposed the 10-percent tariffs, prompting China to respond with its own. Ahead of the leaders’ dinner in Argentina, investors had been bracing for a range of outcomes including a worse-case end to talks and more tit-for-tat measures that would have continued to crimp economic and corporate profit growth.

Instead, the Americans and Chinese officially lauded the result.

Beijing agreed to buy what the White House called a “very substantial” amount of agriculture, energy, industrial and other products. While the clock ticks on the 90-day tariff reprieve, the two sides will try to work out thorny issues including technology transfer, intellectual property and cyber theft.

“It’s not solved by any stretch of the imagination,” said Thooft. But risk assets and cyclical U.S. sectors like materials and industrials should benefit, he said on Sunday.

An initial jump late on Sunday of nearly 2 percent in Nasdaq 100 e-mini futures suggested that technology companies, many of which were hardest hit in the selloff, could rebound.

Gary Shapiro, CEO of the Consumer Technology Association, said he was encouraged by the trade talks and warned that raising tariffs to 25 percent as the White House had threatened “would likely hurt consumers, put several American companies out of business and displace thousands of American workers.”

Energy prices could also rebound on Monday since cooling trade tensions could boost the world economy and spur demand.

Powell was scheduled to testify on Wednesday to a congressional Joint Economic Committee. But the hearing is expected to be postponed to Thursday because major exchanges will be closed on Wednesday in honor of former U.S. President George H.W. Bush, who died on Friday at the age of 94.

Last week, Powell backed the Fed’s gradual tightening but said its policy rate was “just below” a range of estimates of the so-called neutral level that neither stimulates nor cools growth. In response, stocks shot up and largely recovered November’s earlier losses.

In the wake of Powell’s speech, Nicholas Colas, co-founder of DataTrek Research, said: “what happens in Buenos Aires will determine if stocks post a positive 2018.”

The specter of a global trade war has hovered over the market since March when Trump announced tariffs on imported steel and aluminum. He also recently said the United States was studying auto tariffs, which could ripple through Europe and Japan, while a pact with Canada and Mexico left some investors heartened about potential progress with China.

“But given the stern U.S. stance, we’re certainly not raising our outlook,” she said of a 2.8-percent growth estimate for the fourth quarter, still comfortably above potential.