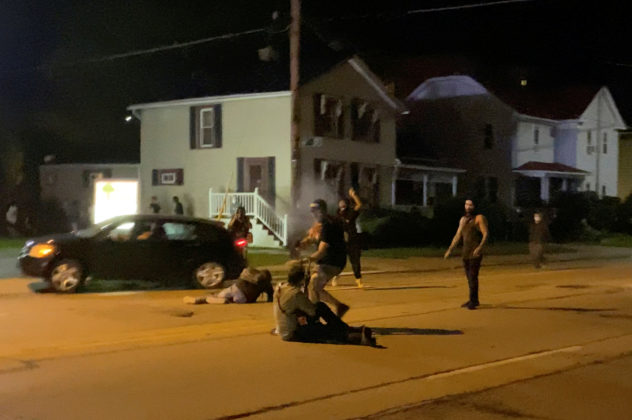 A man is being shot in his arm during a protest following the police shooting of Jacob Blake, a Black man, in Kenosha, Wisconsin, U.S., August 25, 2020, in this still image obtained from a social media video. Brendan Gutenschwager/via REUTERS

By Brendan McDermid and Stephen Maturen

KENOSHA, Wis. (Reuters) – Two people died and a third was wounded after street protests over the police shooting of a Black man erupted into gun violence late Tuesday and early Wednesday in Kenosha, Wisconsin, police said.

The Lake Michigan city of about 100,000 has been rocked by civil unrest since Sunday, when police shot Jacob Blake, 29, in the back at point-blank range. The incident, captured on video, has reignited protests over racism and police use of force in the United States.

The third straight night of protests, which coincided with the second night of the Republican National Convention, had appeared to turn calm after police fired tear gas and rubber bullets at protesters who defied a curfew.

But with a combustible mix of demonstrators still roaming the streets – including self-appointed militias armed with rifles – tensions boiled over shortly before midnight, leading to chaotic scenes of people running and screaming amid a volley of gunfire and others tending to gunshot wounds.

It remained uncertain what prompted the initial gunfire, though it involved a white man with a rifle who wrangled with and fired on other civilians, then walked past several police cars without being arrested, video on social media showed.

The Kenosha protests have drawn mostly peaceful demonstrators under the Black Lives Matter banner, but a range of white and Black people have caused trouble late at night, setting fires, vandalizing public property and bashing vehicles with baseball bats.

The Kenosha Guard, a group identifying itself as a local militia on Facebook, posted a message warning authorities ahead of time they would be present on city streets.

“We are unaware if the armed citizen was answering the Kenosha Guard Militia’s call to arms,” the group later posted on Facebook. “Just like with the shooting of Jacob Blake, we need all the facts and evidence to come out before we make a judgement. God Bless and stay safe Kenosha!”

“Last night the situation went from bad to worse,” Steil said in a statement. “The violence must be stopped.”

Anti-racism protesters also clashed with police in Portland, Oregon, and Louisville, Kentucky, on Tuesday night, part of a wave of national protests that have continued since the May 25 death of George Floyd, a Black man who died after a white Minneapolis police officer knelt on his neck.

As the crowd disperses around him, the man walks freely down the street with his hands in the air and rifle hanging in front of him.

Several police vehicles, apparently responding to the mayhem, drive past the man without stopping him. There have been no reports of an arrest.

Kenosha police said in a statement that two people died and a third gunshot victim was taken to a hospital with serious injuries, though he was expected to live. They pleaded for witnesses to come forward, asking for additional video or photos beyond those posted on social media.

Other videos showed a white man who appeared to be shot in the head as several people rushed to his aid, frantically trying to treat his wound and keep him alive.

Yet another video showed a white man with a severe arm wound sitting on the ground and being aided by an armed man as police approached.

The protests began in Kenosha, located between Milwaukee and Chicago, on Sunday after video of Jacob Blake’s shooting that afternoon went viral.

After struggling with police, Blake broke free and walked around his SUV to the driver’s side, where he was shot in the back after opening the door. Three of his young sons were in the car, witnesses said.

Blake was hit by four of the seven shots fired and left paralyzed and “fighting for his life,” his family and lawyers said on Tuesday, hours before the latest round of civil unrest broke out in Kenosha.

Blake underwent another round of lengthy surgery on Tuesday to stabilize his spine with rods and screws, and it may take days or weeks to determine the extent of the damage, Patrick Salvi Sr., a lawyer for Blake’s family, told CNN on Wednesday.

Salvi also said Kenosha officials have been “tight-lipped” about their investigation into the shooting, depriving the family of the police officers’ version of what happened.

“Anyone watching that video cannot understand why in God’s name the officer starts shooting at point-blank range at Jacob,” Salvi said. “We’re going to find out.”

The Wisconsin Department of Justice is leading the investigation and has yet to comment.