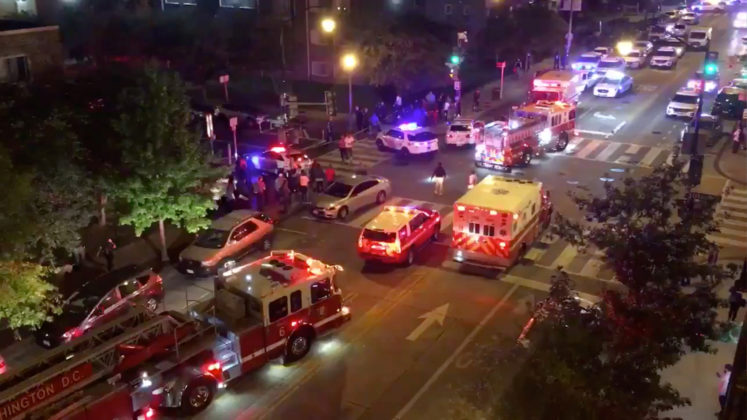 In the first attack, one man was killed and five people wounded, two of them critically, in a drive-by shooting. The victims had been standing in an apartment building courtyard in the Columbia Heights neighborhood when they were shot, Metropolitan Police commander Stuart Emerman said.

Two suspects were seen in a Nissan sedan and used an “AK style rifle,” police said in statement.

About half an hour after the first incident, three people were shot in the northeastern part of the city, leaving one dead, according to NBC’s Washington affiliate. There was no initial indication the two shootings were linked, NBC reported, citing police.

DC Police on Twitter confirmed the second shooting in the 1400 block of Rhode Island Avenue just south of the Brookland neighborhood but gave no other details.

Gun violence has been a regular feature of American life, but a spate of recent mass shootings in Texas, Ohio and other states have renewed debate over the nation’s gun laws and spurred calls for action.

Many Republicans and the powerful gun lobby, the National Rifle Association, oppose further restrictions on gun ownership. Republican Vice President Mike Pence has decried the gun-control stance and accused the Democrats as having a “radical agenda.”

Republican President Donald Trump, in an interview with Fox News that aired on Thursday, said he was looking for compromise steps that both Democrats and Republicans could support on gun control, but has given no details on what action he may push.

House Democrats have passed several gun initiatives, including expanded background checks, but the Republican-led Senate has not taken up the legislation.

The controversy over the use of assault rifles has entered the 2020 presidential race, with candidate and former U.S. Representative Beto O’Rourke declaring at a Democratic debate that he would confiscate such rifles.

O’Rourke has made gun safety the centerpiece of his campaign since late August, when his hometown of El Paso, Texas, was the site of a racially motivated mass shooting that killed 22 people inside a Walmart store.

On Thursday, gunmaker Colt said it was suspending its productions of the AR15 and other rifles for the civilian market, the Associated Press reported.