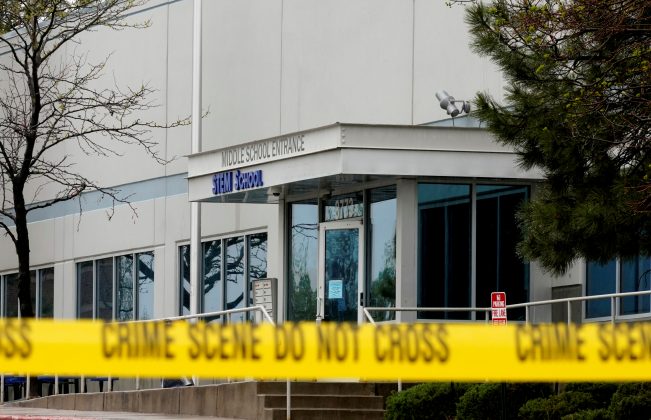 Crime scene tape is seen outside the school following the shooting at the Science, Technology, Engineering and Math (STEM) School in Highlands Ranch, Colorado, U.S., May 8, 2019. REUTERS/Rick Wilking

CASTLE ROCK, Colo. (Reuters) – Two teenage students accused of fatally shooting one classmate and wounding eight in a suburban Denver school made separate court appearances on Wednesday, a day after their arrest on suspicion of murder and attempted murder.

Douglas County District Judge Theresa Slade, who presided over both proceedings, ordered the two suspects to remain held without bond pending their next court hearings, set for Friday, when formal charges are expected to be filed.

The two youths are accused of opening fire with handguns on fellow students on Tuesday in two classrooms at the Science, Technology, Engineering and Math (STEM) School in Highlands Ranch, Colorado, about 25 miles (40 km) south of Denver.

They were arrested by police after several students under fire at the school fought back, including a young U.S. Marine recruit, Brendan Bialy, who survived, and 18-year-old robotics enthusiast Kendrick Ray Castillo, who was killed.

Castillo’s father, John Castillo, told the Denver Fox news affiliate Fox 31, that his son, “gave up his life for others.”

“If he didn’t do it, what would this mess look like?” he said. 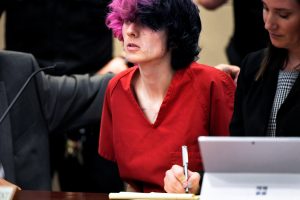 Devon Erickson, 18, accused of taking part in a deadly school shooting at the Science, Technology, Engineering and Math (STEM) School in Highlands Ranch, appears at the Douglas County Courthouse where he faces murder and attempted murder charges, in Castle Rock, Colorado, U.S., May 8, 2019. Joe Amon/The Denver Post/Pool via REUTERS

The first defendant, Devon Erickson, 18, who prosecutors said they were treating as an adult, sat silently at a small table with his head bowed, hands shackled to his waist, flanked by two defense lawyers as a pair of sheriff’s deputies stood just behind them.

His 16-year-old accused accomplice, referred to in court by his lawyer as Alec McKinney, was listed on the court docket by the name Maya Elizabeth McKinney but was addressed by the judge during the hearing as Mr McKinney.

Denver’s ABC television affiliate, citing an unidentified police source, has reported that the younger suspect identified as transgender and had been bullied for it.

Erickson’s hearing was televised live, but the judge closed McKinney’s hearing to cameras. District Attorney George Brauchler said he would decide by Friday whether to charge McKinney as a juvenile or adult.

Dressed in dark blue jail garb with short-cropped brown hair, McKinney said little in court except to answer softly, “No your honor,” when the judge asked the defendant if there were any questions. The judge refused a defense request to unshackle McKinney for the hearing.

No pleas were entered.

The ABC affiliate, Denver 7, said the two pistols used in the attack had been stolen from the home of Erickson. His friends told the Denver Post that he had acted in musical theater and performed as lead singer in several rock bands. According to Denver 7, city law enforcement sources, Erickson’s parents had purchased the guns legally.

Both defendants were being held on suspicion of a single count of first-degree murder and 29 counts of attempted murder, according to court records. Eight students were wounded in the shooting and survived.

The attack occurred less than a month after the 20th anniversary of the Columbine High School massacre in nearby Littleton, carried out by two students who shot 13 people to death before committing suicide.

Precisely what happened inside the STEM school remained unclear as police searched for a motive in the attack.

Sheriff Tony Spurlock said there was a struggle as officers entered the building, and some students said one victim was shot in the chest as he tried to tackle a shooter.

A man who identified himself as Fernando Montoya said his 17-year-old son, a junior at STEM, was shot three times when one assailant walked into his classroom and opened fire.

“It still doesn&rsquo;t seem real to me. It completely came out of nowhere,” Aiden Beatty, a friend of Erickson, told the Denver Post, recounting that he broke down sobbing in his car when he heard Erickson had been arrested in the shooting. “I was really close with him. We were best friends.”