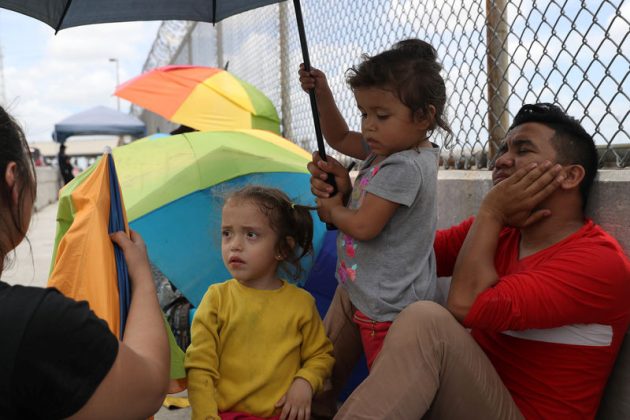 Honduran families seeking asylum wait on the Mexican side of the Brownsville-Matamoros International Bridge after being denied entry by U.S. Customs and Border Protection officers near Brownsville, Texas, U.S., June 24, 2018. REUTERS/Loren Elliott

EIELSON AIR FORCE BASE, Alaska (Reuters) – The U.S. military is preparing to house immigrants at two bases in Texas, Defense Secretary Jim Mattis said on Monday, the latest sign of the military being drawn into a supporting role for President Donald Trump’s immigration policies.

Fort Bliss, an Army base in El Paso, Texas, and Goodfellow Air Base in San Angelo, Texas, would be used, Mattis said, but he added that he could not confirm any specifics.

“We’ll provide whatever support the Department of Homeland Security needs in order to house the people they have under their custody,” Mattis told reporters in Alaska before leaving on an Asia trip.

In the face of outrage at home and overseas over his crackdown on illegal immigration, Trump was forced last week to abandon his policy of separating children from parents who are apprehended for illegally crossing the U.S.-Mexico border.

The U.S. military, and Mattis in particular, have stressed that it is simply providing logistical support to the Department of Homeland Security, which deals with immigration issues.

“We’re not going to get into the political aspect. Providing housing, shelter for those who need it is a legitimate governmental function,” Mattis said.

One U.S. official, speaking earlier on the condition of anonymity, said it was expected that one of the bases would house immigrant families and another immigrant children.

On Sunday, Mattis said the U.S. military was preparing to build temporary camps at two military bases to house immigrants but did not name the facilities.

Last week, the U.S. military said it had been asked by the government to get ready to house up to 20,000 immigrant children.

Trump has previously turned to the military to help with his border crackdown. Earlier this year, U.S. National Guard forces were dispatched to border states to help tighten security.

One thought on “Two U.S. military bases in Texas to house immigrants: Mattis”