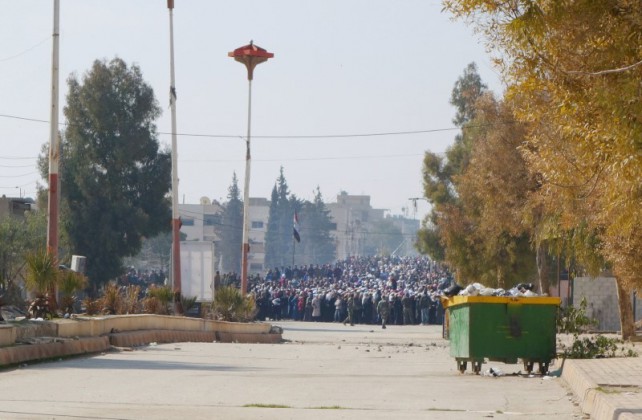 A crowd waits on the edge of a buffer zone that was created in preparation for a food aid distribution in the besieged town of Moadamiyeh, Syria, which was a joint operation between the Syrian Arab Red Crescent (SARC) and the International Committee of the Red Cross (ICRC), on Wednesday, February 3, 2016. REUTERS / Pawel Krzysiek / ICRC / Handout via Reuters

GENEVA (Reuters) – The United Nations plans to make its first air drops of food aid in Syria, to Deir al-Zor, an eastern town of 200,000 besieged by Islamic State militants, the chair of a U.N. humanitarian task force said on Thursday.

Jan Egeland, speaking to reporters in Geneva a day after U.N. aid convoys reached five areas, some besieged by government forces and others by rebels, said the U.N.’s World Food Programme (WFP) had a “concrete plan” for carrying out the Deir al-Zor operation in coming days.

He said the WFP hoped to make progress reaching “the poor people inside Deir al-Zor, which is besieged by Islamic State. That can only be done by air drops,” said Egeland.

“It’s a complicated operation and would be in many ways the first of its kind,” Egeland said, giving no details of the air operation, which is far more costly than land convoys.

Egeland, who is head of the Norwegian Refugee Council, later told Reuters in Oslo: “It is either airdrops or nothing. Airdrops are a desperate measure in desperate times.”

A WFP official was not available to comment on where cargo planes would depart from or what they would carry.

Deir al-Zor is the main town in a province of the same name. The province links Islamic State’s de facto capital in the Syrian city of Raqqa with territory controlled by the militant group in neighboring Iraq.

Egeland chaired a three-hour meeting of the humanitarian task force on Syria, where he said that many member states pledged support for the attempt to reach Deir al-Zor.

The U.N. estimates there are 486,700 people in around 15 besieged areas of Syria, and 4.6 million in hard-to-reach areas. In some, starvation deaths and severe malnutrition have been reported.

“We hope to be able to reach the remaining areas in the next days,” Egeland said, adding the group would meet again in a week.

Britain’s foreign minister Philip Hammond said in a statement: “Starvation of civilians as a method of combat is unacceptable. The international community and particularly Russia, which has unique influence, must put pressure on the Assad regime to lift sieges and grant full humanitarian access.”

In the past 24 hours, 114 U.N. trucks delivered life-saving food and medical supplies to 80,000 people in five besieged areas, enough for one month, Egeland said.

These were Madaya, Zabadani and Mouadamiya al-Sham near Damascus, which are under siege by government forces, and the villages of al-Foua and Kefraya in Idlib province, surrounded by rebel fighters.

It marked the “beginning of the task” assigned by ministers from major and regional powers who met a week ago in Munich.

But some “vital medical items” were not delivered, he said.

A spokesman for the World Health Organization (WHO) said that government forces had removed some medicines for emergency and trauma care from supplies bound for Mouadamiya, but had allowed a hemodialysis machine for diabetics, medicines and nutritional supplements.

(Reporting and writing by Stephanie Nebehay in Geneva; additional reporting by Gwladys Fouche; Editing by Dominic Evans and Katharine Houreld)