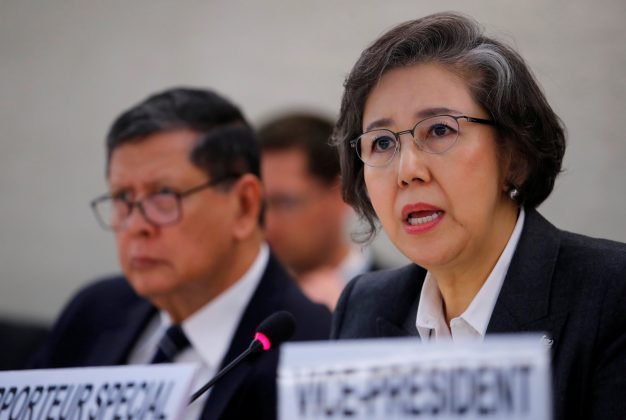 REFILE - CORRECTING TITLE Special Rapporteur on the situation of human rights in Myanmar, Yanghee Lee (R) gives her report next to the Chairperson of the Fact-Finding Mission on Myanmar Marzuki Darusman, during the Human Rights Council at the United Nations in Geneva, Switzerland, March 12, 2018. REUTERS/Denis Balibouse

GENEVA (Reuters) – The Myanmarese government appears to be pursuing a policy of starvation in Rakhine state to force out the remaining Muslim Rohingya population, a U.N. investigator said on Monday.

Lee said atrocities against the Rohingya Muslim minority “bear the hallmarks of genocide”. She called for the council to set up an entity in Bangladesh, where more than 650,000 Rohingya have fled, to collect evidence for potential trials.

Myanmar’s envoy Htin Lynn rejected Lee’s remarks and called for the council to fire her.

Lee said the violence in Rakhine had eclipsed anything seen in recent years in Myanmar, where the government has also fought insurgents in Shan, Kayin and Kachin states.

Myanmar’s military had also advanced into Mutraw District in Kayin State, an area controlled by the Karen National Union, despite a ceasefire agreement, she said.

“This ceasefire violation led to 1,500 villagers from 15 villages having to flee. I am very concerned about these continuing offensives; the path to peace is through inclusive political dialogue, and not through military force,” she said.

In Rakhine state, Myanmar appeared to be pursuing a policy of forced starvation to make life there unsustainable for the Rohingya, Lee said.

Marzuki Darusman, chairman of a fact-finding mission on Myanmar set up by the council, said his team had received a flood of allegations against the security forces in Rakhine, Kachin, Shan and elsewhere.

“All the information collected by the Fact-Finding Mission so far further points to violence of an extremely cruel nature, including against women,” he said.

“The Fact-Finding Mission has met with women who showed fresh and deep bite marks on their faces and bodies sustained during acts of sexual violence.”

Myanmar’s ambassador Lynn did not respond to the criticism in detail but told the council it was wrong to assert that Myanmar’s leadership remained indifferent to the allegations.

“Our leadership and the government shall never tolerate such crimes. We are ready to take action, where there is the evidence,” he said.