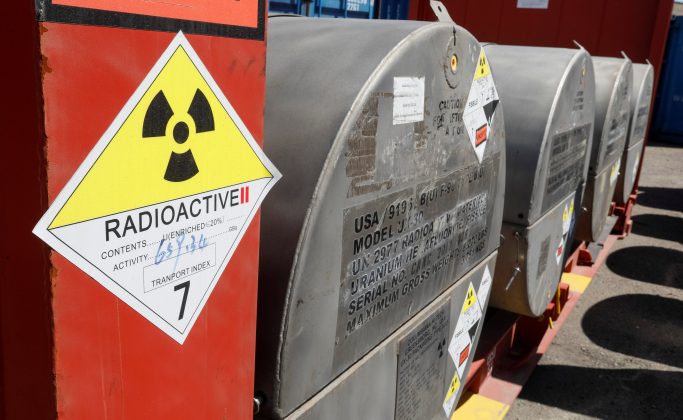 A view shows railway packages for containers with uranium hexafluoride salt, raw material for nuclear reactors, similar to the one to be used for the IAEA Low Enriched Uranium (LEU) Bank, at the Ulba Metallurgical Plant in the northeastern industrial city of Oskemen, Kazakhstan May 26, 2017. Picture taken May 26, 2017. REUTERS/Shamil Zhumatov

OSKEMEN, Kazakhstan (Reuters) – The U.N. global nuclear watchdog is about to open a uranium bank in the Central Asian state of Kazakhstan, but it may never have any customers.

The raw material used to make nuclear fuel and atomic bombs will be stored in a Soviet-era industrial plant where security was once considered so lax that all the highly enriched uranium kept there was removed in a covert U.S. operation in 1994.

The International Atomic Energy Agency’s goal now is the same as Washington’s 23 years ago as it prepares for next month’s launch of its Low Enriched Uranium Bank in the city of Oskemen — to prevent nuclear proliferation.

But this time there will be no weapons-grade uranium involved and in the best-case scenario the $150-million bank will never need to be used.

IAEA member states will be able to “draw” low-enriched uranium at market prices if supplies of fuel to a nuclear power plant are disrupted “due to exceptional circumstances”, but the bank will be a lender of last resort.

The aim is to discourage nations from spending time and money on developing nuclear-enrichment technologies that might be used to purify uranium to weapons-grade levels, and to deter countries from trying to obtain uranium illegally.

The IAEA wants to have a means to avert any new dispute similar to the standoff over Iran’s atomic program before world powers reached a deal with Tehran to limit its nuclear activities.

“Does it guarantee that new countries will not create enrichment facilities? Of course not,” Anton Khlopkov, founding director of the Moscow-based Center for Energy and Security Studies, said of the new bank.

“But it creates additional incentives for new nations not to set up enrichment facilities.”

Funding to build the low-enriched uranium bank in eastern Kazakhstan, about 1,000 km (620 miles) from the capital Astana, came from several countries including the United States, and U.S. billionaire Warren Buffett contributed $50 million.

Based in a small industrial building on the territory of the Ulba Metallurgical Plant (UMP), set up in the 1940s to produce components for the Soviet arms nuclear arms program, the bank will store up to 90 tonnes of low-enriched uranium — enough for a light-water reactor to power a large city for three years.

Security will be tight. The bank, which has its own railway terminal, is surrounded by a metal netting fence that is about 3.5 meters high and packed with security cameras.

The UMP’s outer rim is protected by two three-meter high fences, one of concrete-and-steel and the other of metal netting, and both have barbed wire on the top. National Guard servicemen patrol the territory with dogs.

Back in 1994, three years after the Soviet Union broke up, the United States had feared criminals would be able to steal the 90-91 percent enriched uranium stored in a warehouse at the UMP — either to sell it to a state trying to become a nuclear power or to use themselves to build a nuclear device.

In October and November of that year, with the agreement of the Kazakh government, a team of U.S. specialists secured 600 kg of the radioactive material — enough to make 24 nuclear bombs — and flew it safely to the United States.

The operation known as Project Sapphire helped Kazakhstan, a former Soviet republic that became independent in 1991, build trust with the international community and paved the way to the IAEA’s decision to base its uranium bank there.

Kazakhstan was also a logical choice as host because it is the world’s biggest producer of uranium.

Uranium hexafluoride — a highly toxic, white-gray, waxy solid used in the enrichment process — will be stored at the bank in 60 cylinder-shaped containers. It cannot immediately be turned into fuel, a process which would take several months.

“Sixty cylinders will contain about 90 tonnes of uranium hexafluoride,” Alexander Khodanov, the UMP sales director, told Reuters at the plant. “This is enough to produce a full fuel load for a standard nuclear reactor… I think half a year would be sufficient time to supply the material and produce the fuel.”

Countries such as Iran have said they need enrichment facilities to ensure a steady supply of fuel for nuclear power plants, but none has said it is about to buy any uranium from the bank in Oskemen.

Russia has operated a similar bank since 2010 in the grounds of the Angarsk Electrolysis Chemical Complex in southern Siberia which was set up in 1954 to enrich uranium for the Soviet Union.

“I think the fact that the Russian bank has not been used in almost a decade shows that the market is working,” Khlopkov said. “I hope the Kazakh one will never be needed either.”

Critics question whether there is any need for another uranium bank, especially as the one in Angarsk has never been tapped and uranium is not in short supply globally. Some Kazakhs say the Oskemen facility could become a white elephant, as the Kazakh government must pay for its maintenance and security.

But UMP’s Khodanov said the new bank’s creation was an opportunity for Kazakhstan to sell uranium to the IAEA as the facility it builds up its reserves. Hosting it also carries prestige and signals international recognition of Kazakhstan’s commitment to nuclear non-proliferation.

Advocates of the bank say demand for low-enriched uranium will grow as more countries turn to nuclear power, and that an independently run facility will help reassure countries that would be reluctant to turn to Russia if they needed uranium.

(Writing by Olzhas Auyezov, additional reporting by Pavel Polityuk in KIEV and Christian Lowe in MOSCOW, Editing by Timothy Heritage)